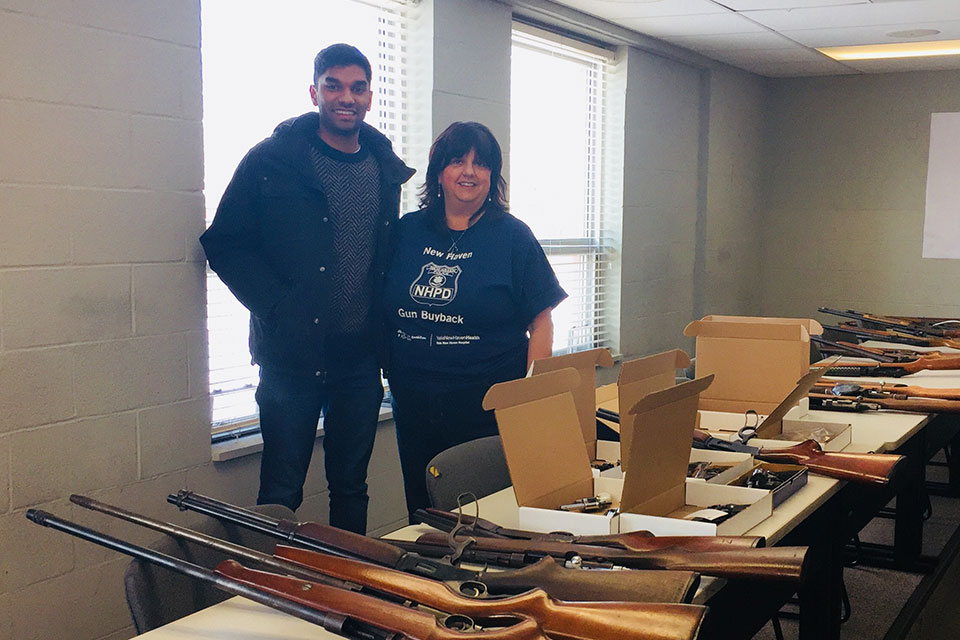 Rohan Naik with members of the New Haven Police Department at the gun buyback.

For his capstone project in the Multidisciplinary Academic Program in Human Rights of the Schell Center, Rohan Naik YC ’18 helped organize New Haven's sixth gun buyback program. On December 16, 2017, around 70 people, undeterred by snowy streets, came to the New Haven Police Academy to turn in a record 141 firearms in exchange for gift cards-all with no questions asked.

This latest buyback adds what New York Times editorial writer Frances X. Clines called a "biblical twist": New Haven police officers will turn swords into ploughshares by working with local sculptor Gar Waterman and Colorado Springs-based RAWTools Inc. to transform the surrendered firearms into gardening tools. After the guns are melted down, staff from RAWTools Inc. will train volunteers in local correctional institutions, including the jail on Whalley Ave, to weld them into gardening tools. The tools will then be sent to New Haven public schools, where schoolchildren will use them to harvest fruits and vegetables for local soup kitchens. As Officer David Hartman said, "We're literally going from a working firearm to a tomato."

In the Human Rights Program, run by the Schell Center for International Human Rights, undergraduates study human rights from an interdisciplinary perspective. In their senior year, students complete a capstone project, which is informed by their academic work, summer internships, and extracurricular activities.

Naik first learned about gun buybacks in a New York Times article covering a recent program implemented in Los Angeles by the nonprofit Gun by Gun, which organizes buybacks across the country. Naik said, "It seemed like a really great way for regular people to work on gun reform in a time where there's a lot of political inaction around the issue-when there are deadly shootings pretty frequently and nothing really seems to change."

Naik decided he wanted to help bring another buyback program to New Haven for his capstone project. His first step was learning about the city's previous buybacks, which have brought in 700 firearms and were organized by the New Haven Police Department and Yale New-Haven Hospital, along with several community organizations. Dr. Pina Volano, who manages Yale-New Haven's Injury Prevention Community Outreach & Research, and Officer Hartman, spokesperson for the New Haven Police Department, were excited to work with Naik to revamp the gun buyback program. The Newtown Action Alliance and the Injury Free Coalition for Kids of New Haven also joined the effort.

As planning began for the buyback, Naik focused on outreach and fundraising. He launched a new partnership with Gun by Gun, which brought in more than $3,000 in donations from across the country for the gun buyback and helped raise awareness about it. Naik also contacted local faith-based communities and other constituent groups to reach "low-income people in local black and brown communities who are at most risk of gun violence." He wanted to avoid the pitfalls of some other buybacks across the nation, which targeted wealthier gun collectors rather than those from communities that are most vulnerable to gun violence.

Naik was grateful that city and health officials welcomed him so openly into the planning effort. "It's great to feel as though you can have an impact on the city," said Naik, "given that we Yale students take advantage of its resources while we're here." Naik was also proud to have helped expand the impact of the gun buyback through his outreach work and the partnership with Gun by Gun. He hopes that New Haven will pursue more buybacks in the future, and he wants the next one to reach out to undocumented communities and make their residents, who are also disproportionately adversely affected by gun violence, feel safe coming to the police station.

Naik, who says that the Human Rights Program greatly expanded his view of what can be considered a human rights issue, was eager to examine gun violence through a human rights lens rather than a domestic or constitutional one. Naik did not end up using human rights rhetoric in his outreach work or in planning meetings, because, as he explained, "If I went into a neighborhood and put up fliers about gun violence being a human rights violation, I don't think that would attract more people to the buyback, and it'd be unnecessarily confusing." But Naik found that the buyback allowed him to apply what he considers some of the "broader lessons of human rights--working respectfully with vulnerable communities, building citizen power, reaching the most at-risk individuals, and allowing affected individuals to drive programming."

Learn about other capstone projects pursued by students in the Human Rights Program.