Professor Dan Esty ’86 and Dena Adler ’17 JD/MEM attended the U.N. Climate Change Negotiations, which took place from November 30 to December 11, 2015, to support broadened engagement of mayors, governors/provincial leaders, and the private sector in the international climate change negotiations. As part of the Yale Climate Change Dialogue—a project of the Yale Center for Environmental Law & Policy (YCELP)—Professor Esty, Dena Adler, and Lisa Dale (Associate Director of YCELP) partnered with the City of Paris over recent months to contribute to development of a local leaders’ climate change action pledge—the Paris Declaration—and the accompanying 21 Solutions Report.

On December 4, Mayor Hidalgo of Paris and U.N. Secretary-General’s Special Envoy for Cities & Climate Change Michael Bloomberg, hosted the Local Leaders Summit. At this Summit more than 700 mayors and other leaders gathered, providing support for the Paris Declaration, and delivering it to U.N. Secretary-General Ban Ki-moon. The 21 Solutions Report was also released at this event. 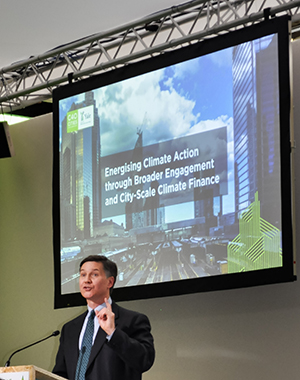 On December 7, the Yale Climate Change Dialogue team partnered with the C40 Cities Climate Leadership Group to host a joint event to discuss how improving city-scale financing can energize and support future climate action from mayors and regional leaders. The event took place in the Blue Zone of Le Bourget—the official venue for the international negotiations—and included panelists and participants from the private sector, academia, and government.

“The momentum of local and regional leaders’ climate action has mobilized the climate negotiations with an increased spirit of possibility,” said Dena Adler. “The Paris Agreement will set the tone for international climate work in coming years, but much work remains to be done on implementation and ratcheting up ambition over time. It has been exciting to be involved in the climate change negotiations at this inflection point and to contribute to the sub-national groundswell of action that will play a crucial role in these coming implementation efforts and in providing capacity to increase ambition over time.”

Lindsay Brewer ’17 JD/MEM is also attending the international climate change negotiations with the Palau delegation as part of a project through the Yale Environmental Protection Clinic.

The Yale Center for Environmental Law and Policy, a joint undertaking between the Yale School of Forestry & Environmental Studies and the Yale Law School, seeks to incorporate fresh thinking, ethical awareness, and analytically rigorous decision-making tools into environmental law and policy.