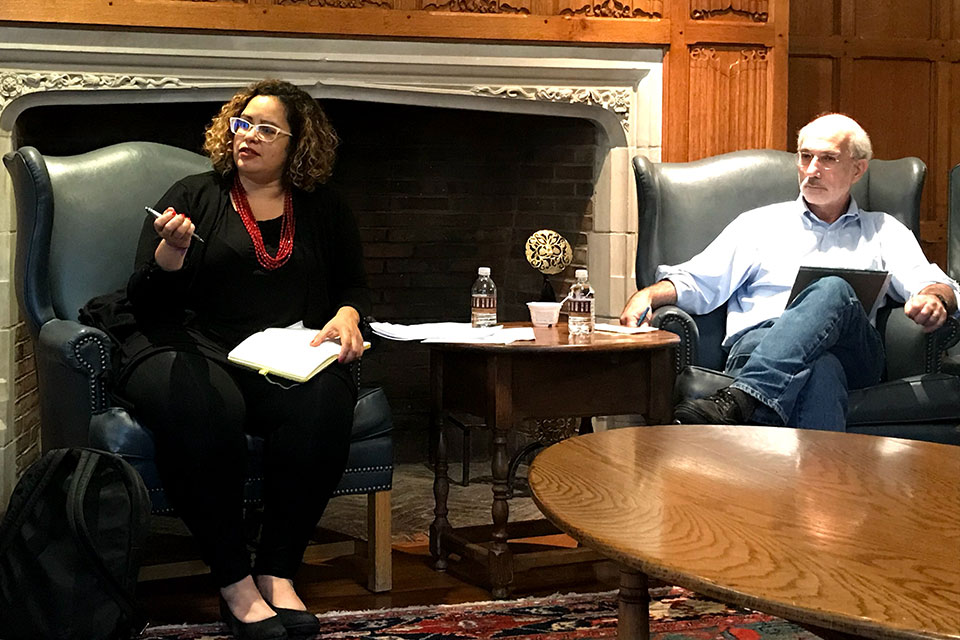 “Before Hurricane Maria hit, how many people had ever thought about Puerto Rico — whether its people were U.S. citizens, whether they voted?” Yarimar Bonilla asked the audience at the Human Rights Workshop on October 11, 2018.

Bonilla, an Associate Professor in the Departments of Latino & Caribbean Studies and Anthropology at Rutgers University, is writing an ethnographic study of the Puerto Rican pro-statehood movement entitled The Unthinkable State. The book’s title refers to the assumption, shared by many Americans and some Puerto Ricans, that it would be inconceivable to have a 51st American state that was Latinx, Spanish-speaking, and overseas.

At the Workshop, Bonilla stressed, “What I’m focused on now is less the impact of Maria and more what it revealed,” such as rampant inequality. Bonilla noted that Puerto Rico is the third most unequal society in the world, and after the hurricane, its richer residents received assistance much more quickly than the poor. Bonilla explained that inequality has been “been building for a while” in Puerto Rico. In the past few decades, the island has lost middle-class jobs and many Puerto Ricans have migrated to the U.S. to seek better economic opportunities. Meanwhile, she said, “elites benefit from Puerto Rico’s status as a tax shelter.” Bonilla worries that if these trends continue, Puerto Rico’s native population will dwindle, as has happened in Hawaii.

Bonilla contended that in law and the social imagination, U.S. territories such as Puerto Rico, Guam, and the Virgin Islands are considered “exceptions, not a system.” She argued that one reason why Puerto Rico and other territories are so seldom acknowledged is that “the fact of these territories runs against the story we tell ourselves about the U.S. — we don’t want admit that we’re a colonial empire with colonial subjects.”

To Bonilla, this colonial relationship manifests in the U.S. “abandon[ing] Puerto Rico’s communities while exploiting their resources.” Bonilla elaborated that the U.S. has long used Puerto Rico’s land for mining, natural gas, and other resources, but has not provided its populations with services, “let alone civil rights.” Bonilla suggested that the recent deal to restructure Puerto Rico’s debt similarly exploits the Puerto Rican people, who are now paying a very high sales tax rate of around 11 percent. “That money doesn’t go into building roads or infrastructure development,” said Bonilla, “but into paying off debt.”

Bonilla explained that Puerto Ricans are divided over how best to secure more rights. “The crisis over Puerto Rico’s sovereignty is a crisis of imagining an alternative to what exists now,” she said, noting that the traditional political parties in Puerto Rico are more focused on the territory’s relationship to the U.S. than on thinking about new forms of governance for the island. Bonilla pointed out, “A lot of folks don’t want to be an independent nation — they don’t think it’s possible or pragmatic.” Bonilla did not share her own opinions on this subject, but did express her desire for more open debate about different options for Puerto Rico’s political future and status.

Hurricane Maria, Bonilla thinks, could serve as a catalyst for such political change. Throughout her talk, Bonilla discussed resilience — a word often used to describe populations in the aftermath of a natural disaster. But Bonilla urged the audience to reconsider celebrating resilience and asked, “At what point do you say that you’re not willing to bounce back anymore?” In her view, Puerto Ricans should recognize the trauma that came from surviving the hurricane, as well as from having “a polity that mistreats them” and neglected to provide them with services.

Bonilla expressed her frustration that, after the hurricane, Puerto Ricans were advised to prepare for the next disaster by stocking up on generators and supplies, rather than to demand more rights and services from their government. “People are preparing to be increasingly abandoned by the state,” she said, “which is something not resolvable through life hacks — it’s much more systemic.”