During the last few decades, state and local jurisdictions have moved away from using public funding sources to pay collectively for government services—including courts, jails and prisons, and community supervision. Instead, many jurisdictions charge individuals for a myriad of interactions with the legal system, such as traffic violations, criminal charges and detention, diversion programs, and prosecution at trial. As the Fines and Fees Justice Center has explained, one consequence of this system is “a two-tier system of justice where poor people—and particularly communities of color—are disproportionately punished.”

Since 2018, and with the support of Arnold Ventures, the Liman Center has joined in building network of people and organizations knowledgeable about public finance, budgeting, the law, and practices of fines, fees, and criminal law enforcement. Meeting electronically and soon in person, participants have joined each other to learn about research, community initiatives, and reforms of oppressive legal practices to reduce the economic burdens that law imposes.

The 26th annual Liman Colloquium will bring this Public Finance network and the Liman Center’s community together at Yale Law School. The program will explore reforming the funding for government services. In light of ongoing economic challenges, our concerns have heightened about the imposition of yet more regressive fines, fees, costs, surcharges, and other monetary assessments. Through strengthening ties within and across diverse groups of people, we hope to generate useful work to fund government services fairly.

The discussion begins Thursday afternoon with Bryan Stevenson, author of Just Mercy and Director of the Alabama-based Equal Justice Initiative, who will speak about “The Costs of Punishment.” It continues with a series of panels on Friday—addressing topics including the analysis of state and local public finance, ongoing economic challenges, and innovative policy options like debt relief and budget transparency.

Joining the Liman Center in convening this Colloquium are the Fines and Fees Justice Center, the Center on Budget and Policy Priorities, the Policy Advocacy Clinic at the UC Berkeley School of Law, the Insight Center, and the Brennan Center for Justice. 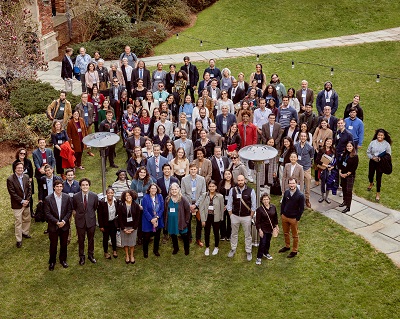 On April 7–9, 2022, the Liman Center marked its twenty-fifth anniversary and more than fifty years since the inauguration of clinical education at Yale Law School with the founding of the Jerome N. Frank Legal Services Organization (LSO). Since the inception of the Liman Center, more than 170 law school graduates have held Liman Fellowships, several hundred undergraduates have held Liman Summer Fellowships, and many hundreds of students have been part of the clinics. To reflect on those decades and on the future, we convened a colloquium to bring together an intergenerational group of students, faculty, and alumni from these programs, and many others. We explored what inventing these new modalities within law schools has meant for legal education and for the communities that such lawyering seeks to serve.

We did so at a time when, around the world and inside universities, sharp divisions have emerged about how educational institutions participate in  and respond to a host of inequalities—in and outside of legal systems. By reflecting on the history, conflicts, modes, and political economy of “public interest” lawyering within and beyond the academy, we endeavored to celebrate what we have helped to institutionalize and to think critically about our roles in these troubling times.

We have much to appreciate. Yale Law School has been a proud innovator of clinical legal education, and the law school helped the Liman Center to pioneer public interest fellowship programs for our graduates. Together, these two programs have been critical sites for public interest law praxis at Yale Law School and have helped to support generations of educators and lawyers. Many of our graduates, moving in and out of the academy, government, and the public and private sectors, are leaders in their fields. During this working symposium, we gathered together in an effort to understand what we have accomplished and to interrogate what innovative leadership in the academy has and could produce. We did so with a keen awareness that we have much to worry about, given that commitments to egalitarian participation in the body politic are challenged and that divisions are intense.

Money and Punishment, Circa 2020 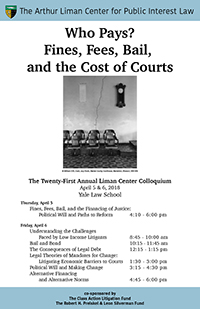 Who Pays? Fines, Fees, Bail, and the Cost of Courts 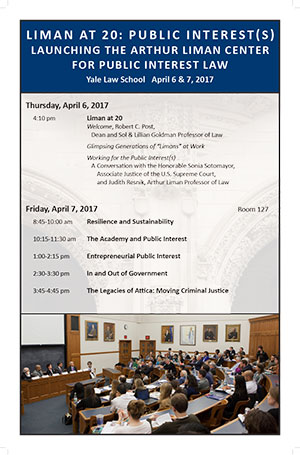 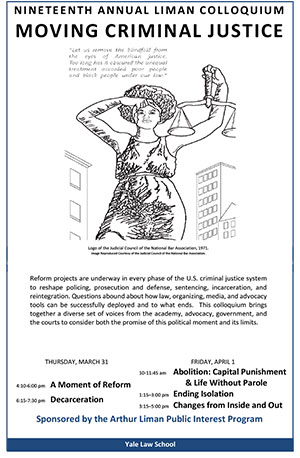 Reform projects are underway in every phase of the U.S. criminal justice system – to reshape policing, prosecution and defense, sentencing, incarceration, and reintegration. Concerns about the toll of mass incarceration have created consensus across the political spectrum about the need for change. But questions abound about how law, organizing, media, and advocacy tools can be successfully deployed and to what ends. This colloquium considered how reform agendas are formulated, gain currency, and result in changes in laws and practices that produce consequences, whether generative or harmful. By examining how reform efforts build on extant social, legal and political movements, or create new ones and imagine the future, we sought a better understanding of both the promise of this political moment and its limits. 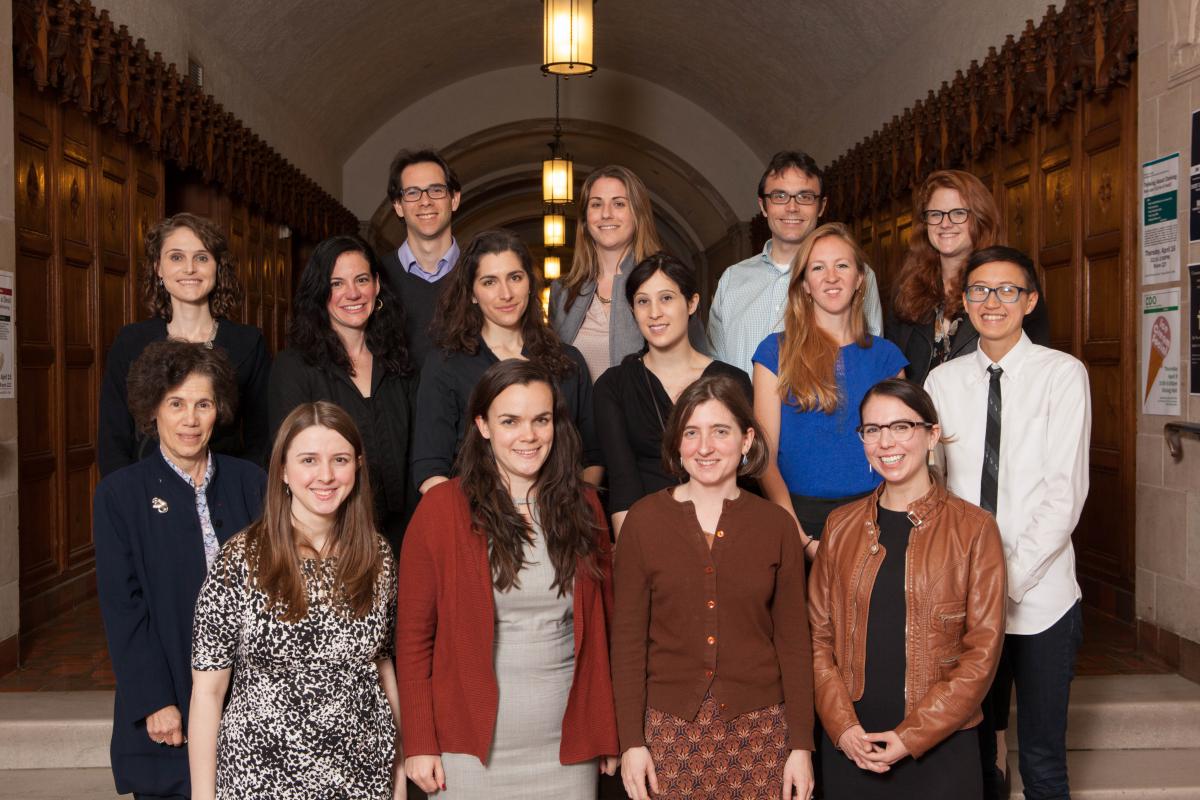 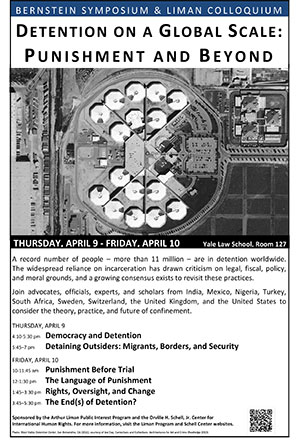 Detention on a Global Scale: Punishment and Beyond
Thursday and Friday, April 9-10, 2015
Yale Law School

This convening, the first jointly sponsored by both programs, explored the expansion of the justifications for and forms of confinement. A record number – more than 11 million – of people are in detention. In addition to the classic justification of criminal punishment and detention prior to criminal trial, governments also have categories of “civil” detainees, including the mentally ill, juveniles, migrants, and those deemed a threat to national security. Their confinement often takes forms largely indistinguishable from prisons. Critics have numerous objections on legal, practical, and moral grounds, and because the numbers in detention place immense fiscal burdens on governments, many commentators believe that opportunities now exist to revisit these practices. 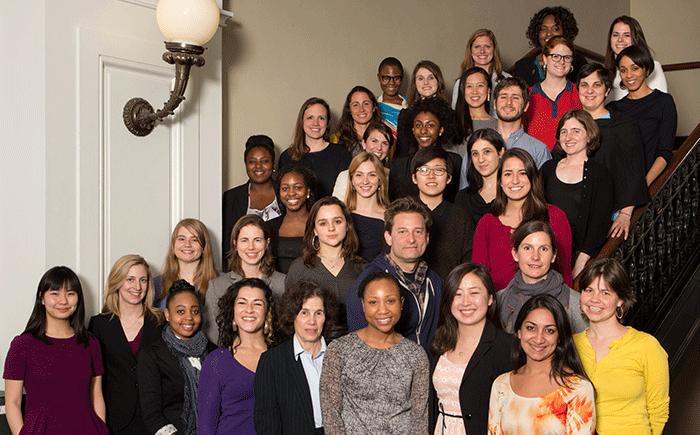 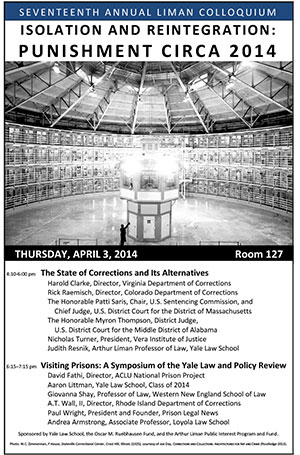 This colloquium explored how to reduce the isolation of prisoners, in terms of the manner and the degree to which correctional facilities rely upon separation of prisoners to maintain order, and the distances separating prisoners from their communities of origin and from society at large. In centuries past, reformers such as Cesare Beccaria and Jeremy Bentham offered what were then radically new conceptions of punishment. Today’s conditions invite comparably ambitious aspirations to reframe the practices of punishment in the twenty-first century, even as Bentham’s proposed Panopticon stands as a reminder that one generation’s efforts at improvements may come to be challenged by the next. 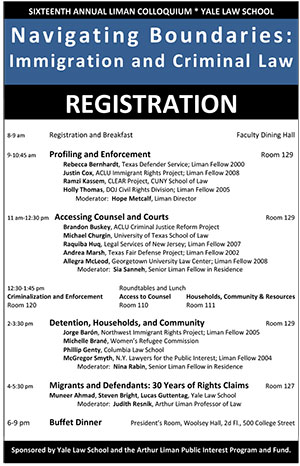 Participants will explore the concept of “borders” and how, in various contexts, law, political orders, and social movements construct, invoke, rely on, and relax borders. Our plan is to explore the idea of borders, its relationship to territorial and jurisdictional borders, and its impact on relationships among individuals, communities, and states. Because civil/criminal, administrative/judicial, and federal/state systems of adjudication and enforcement seek to regulate individuals and borders, we will consider such delineations, particularly as they relate to past, current, and proposed immigration policies. Borders also provide a lens through which to consider how certain groups – women, juveniles, the mentally ill, members of certain communities identified by religion or ethnicity – can be made vulnerable and how law can render their situations peripheral, literally or figuratively. 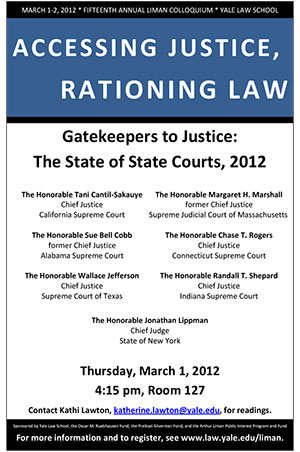 Most state constitutions guarantee “open courts” and rights to remedies. Further, in 1963, Gideon v. Wainwright established a constitutional right to counsel for indigent defendants facing felony charges. Implementation of these rights, however, remains elusive. A 2004 report on criminal counsel by the American Bar Association’s Standing Committee on Legal Aid & Indigent Defendants reached “the disturbing conclusion that thousands of persons are processed through America’s courts every year either with no lawyer at all or with a lawyer who does not have the time, resources, or in some cases the inclination to provide effective representation.” On the civil side, California counted 4.3 million civil litigants without lawyers in its courts in 2009; New York tallied more than 2 million in 2010, and that number includes almost all facing evictions and 95 percent of those in family conflicts.

For its fifteenth anniversary, the Liman Colloquium will take up an overarching question for the twenty-first century: how can courts respond to the demand for their services? The issues include providing adequate representation to criminal defendants, the right to “civil Gideon” for people unable to afford lawyers, and what role, if any, alternative processes and new kinds of courts may play in addressing these challenges. Joining the conversation will be current and former chief justices from several states as well as scholars, students, practitioners, and many of our Liman Fellows. Click here to see the schedule. 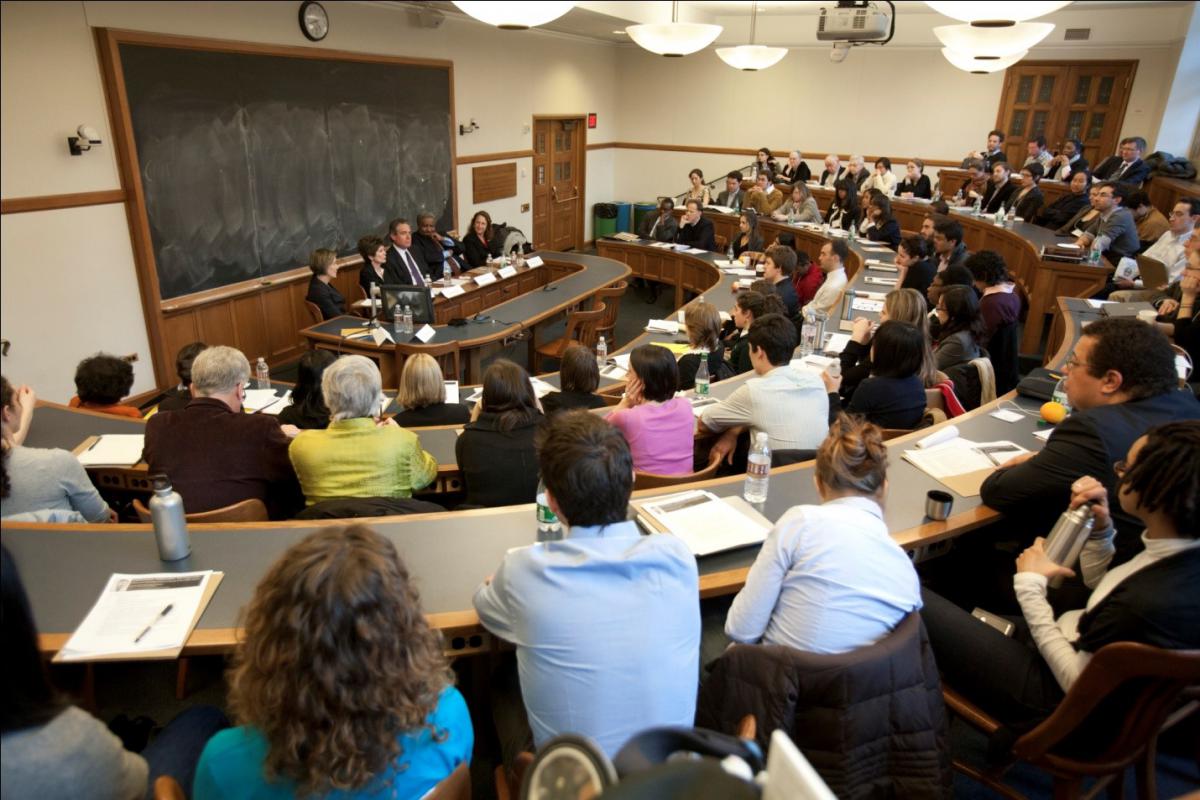 Current and former members of the executive and legislative branches joined advocates to examine their respective roles in serving the public interest. We began the afternoon of Thursday, March 3, with the discussion In and Out of Government: A Conversation. We have asked our panelists to discuss the opportunities and challenges of working in government. On Friday, March 4, we continued to consider the promises and limits of cooperation, as well as the utilities of confrontation and conflict, among public and private actors. Topics included enabling access to justice, responding to environmental disasters, facilitating or discouraging migration, and encounters with the criminal justice system. 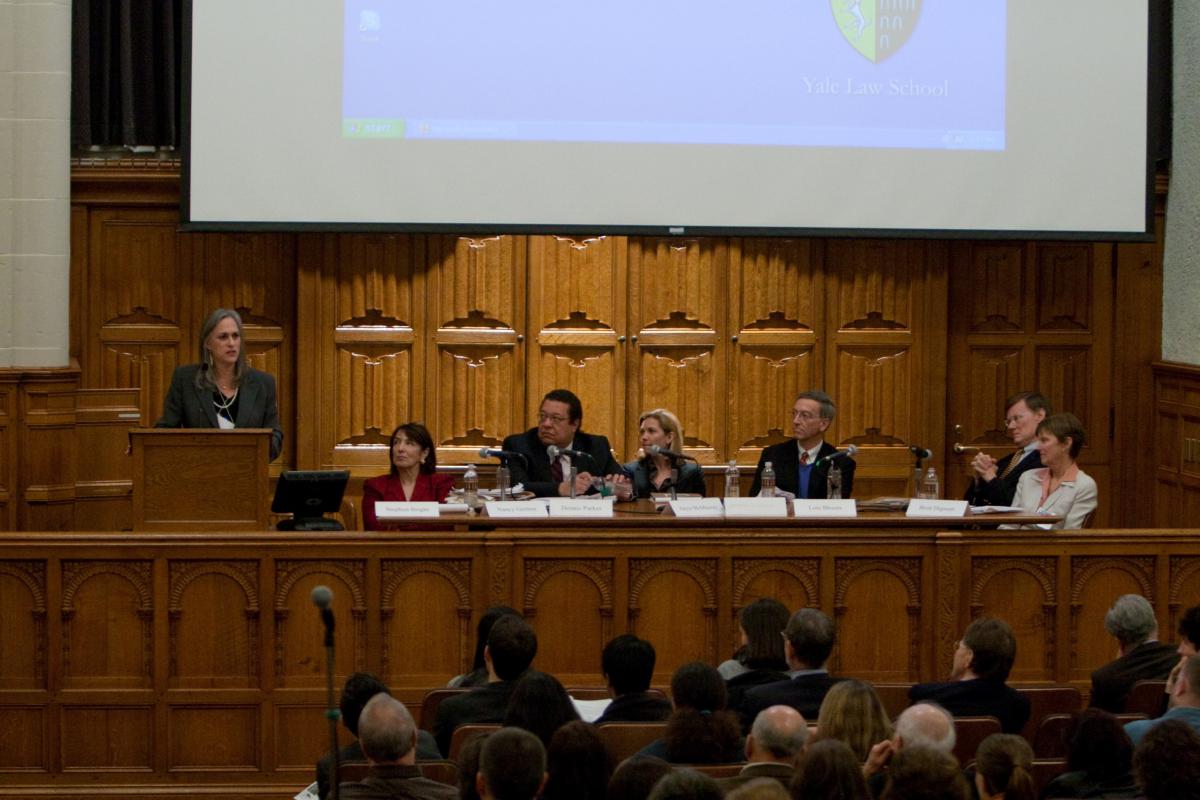 On March 4 and 5, 2010, the Liman Program hosted the Thirteenth Annual Liman Public Interest Colloquium, Imprisoned. With co-sponsorship from the Oscar M. Ruebhausen Fund, the Jerome N. Frank Legal Services Organization, and Yale Law School, the Colloquium brought together over 350 guests and speakers to discuss critical issues in the prison system. In his opening speech on Thursday, Dean Robert C. Post called the Colloquium’s theme “particularly appropriate” for the Liman Program, given Arthur Liman’s work to reform prison conditions as Chief Council to the Special Commission on Attica.

On March 5 and 6, 2009, the Liman Program hosted the Twelfth Annual Liman Colloquium, Forty Years of Clinical Education at Yale: Generating Rights, Remedies, and Legal Services. Co-sponsored by Yale Law School and the Oscar M. Ruebhausen Fund, the colloquium addressed the history of and contemporary issues in clinical education, as it also honored the innovations of Yale clinical faculty members Dennis Curtis, Francis X. Dineen, Carroll Lucht, and Stephen Wizner. Yale’s clinical program has served as an inspiration for many Liman Fellows, and more than two dozen current or former Liman Law Fellows participated, along with Liman Summer Fellows from Barnard, Brown, Harvard, Princeton, Spelman, and Yale – all part of the group of more than 350 people attending the two-day conference. 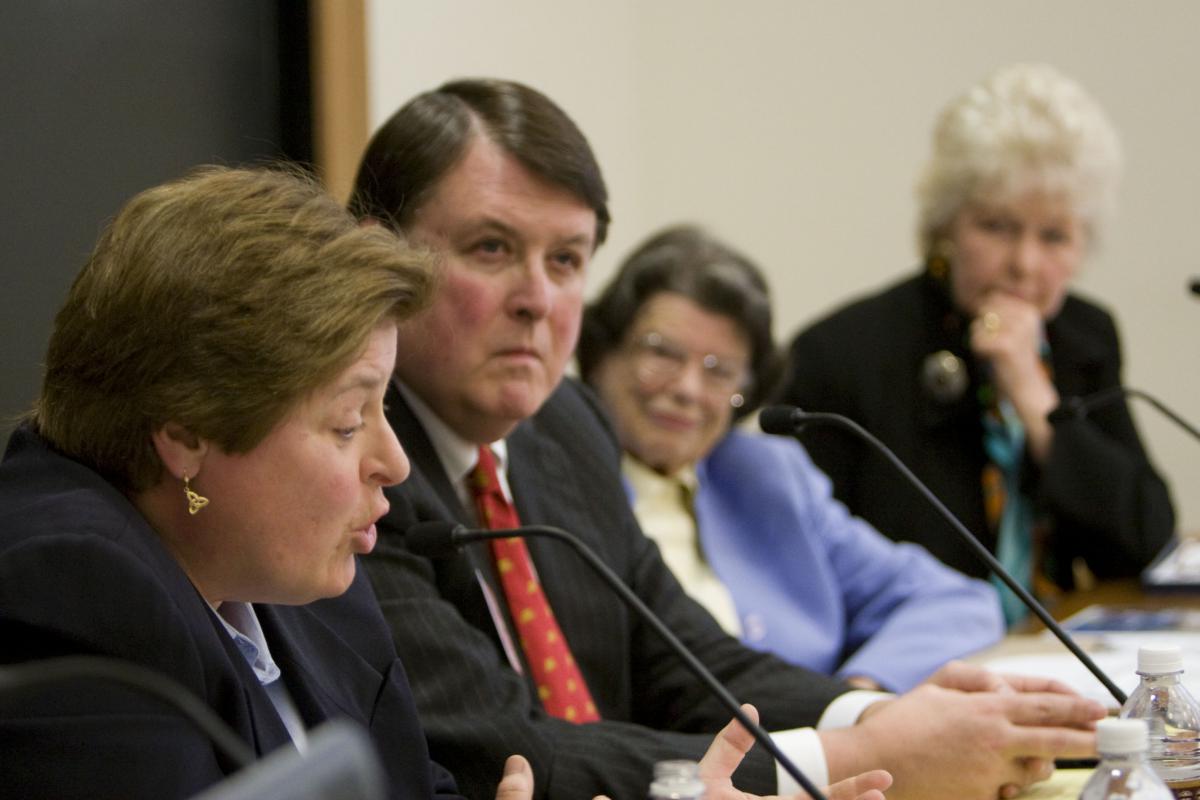 On March 6 and 7, 2008, the Liman Program hosted the Eleventh Annual Liman Public Interest Colloquium, Liman at the Local Level: Public Interest Advocacy and American Federalism. More than 200 people – including scholars, advocates, students, judges, government officials, and Liman Law and Summer Fellows – attended the Colloquium. The first panel, States and Cities as Advocates for the Public Interest, focused on government lawyers. William Marshall (Solicitor General of Ohio and professor at the University of North Carolina School of Law) provided a historical account of the role of state attorneys general. Unlike the “unitary” executive structure in the federal system, many state attorneys general are elected and operate independently from governors. Marshall argued that this divided structure can be productive, serving to produce debate about norms. 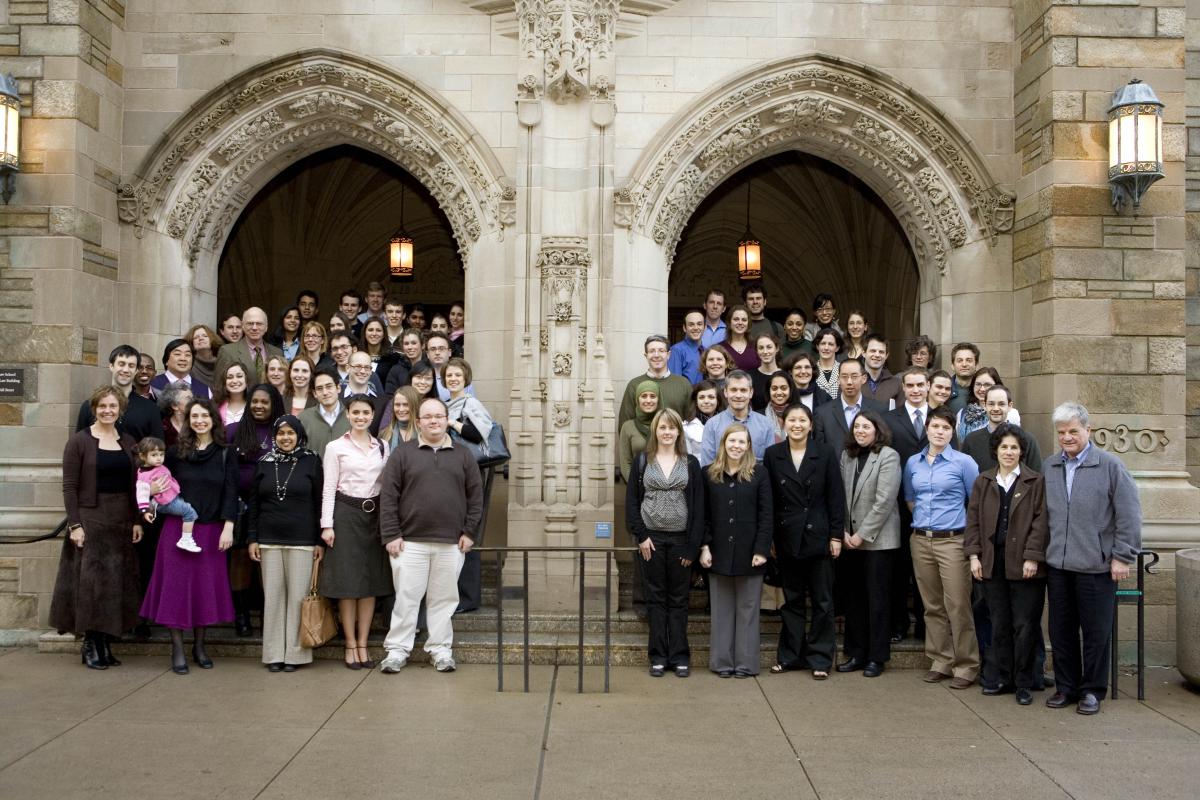 In March 2007, the Liman Program celebrated its tenth anniversary. The Tenth Colloquium opened with an inspiring speech by Mayor Cory Booker, who joined us as the Ruebhausen Fellow. Booker graduated from Yale Law School in 1997, the year the Liman Program was founded. At the Liman anniversary celebration, Mayor Booker inspired the Yale community with stories about his work in Newark and reflections on how to serve the public interest.

On March 2, members of the Liman community spent the day reflecting on the lives of public interest lawyers, discussing their practices with others engaged in similar work, exploring the role of universities and law schools in shaping public interest law, and marking the accomplishments of the Fellows and the Program. The Liman community also bid farewell to Deborah Cantrell and honored her with a gift of more than $1500 collected from fellows to donate to New Haven Legal Assistance.