Advocates in Exile: the 2022 Bernstein Symposium 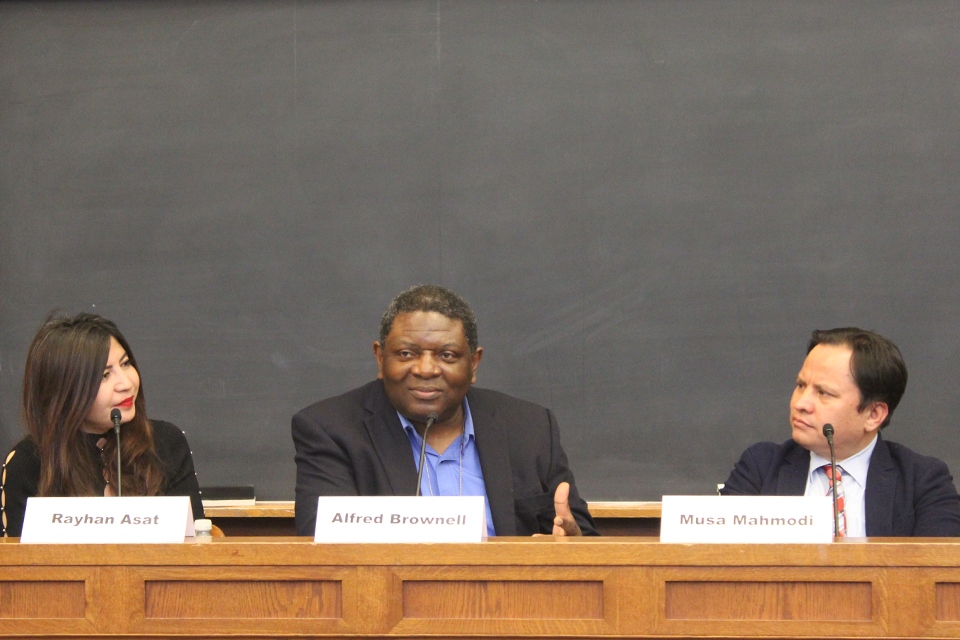 Panelists at the 2022 Bernstein Symposium — from left, Rayhan Asat, Alfred Brownell, and Mohammad “Musa” Mahmodi — spoke about their experiences as human rights advocates in exile.

The 2022 Bernstein Symposium brought together three human rights advocates exiled from their homelands. Rayhan Asat, Alfred Brownell, and Mohammad “Musa” Mahmodi are all Tom & Andi Bernstein fellows at the Schell Center for International Human Rights. In residence at the Schell Center, they have continued to defend human rights in countries to which they can no longer safely return. “Exile: Struggling for Human Rights from Afar” explored their experience as human rights defenders forced to leave their countries and now fighting for change from a distance.

“When you are ripped apart from your country, your world, where you have built so much ... you who were empowering people become all of a sudden helpless,” Alfred Brownell told the audience. “How do you continue your work?”

Through the discussion, each panelist shared how they have navigated that question.

“Can I galvanize the international community around this cause, or will I let it destroy me?”

Rayhan Asat is a human rights lawyer, speaker, and prominent defender of Uyghur rights. Asat's advocacy, she said, is motivated by a personal tragedy: her brother's disappearance into the concentration camps where the Chinese government is imprisoning members of its Uyghur minority.

“Can I galvanize the international community around this cause, or will I let it destroy me?” Asat said she recalled asking herself. “I chose the former.”

Working in exile, though, means targeting allies distant from her brother’s reality.

“How am I going to tell this story to American people who don't understand the repression of an authoritarian government?” Asat said she has wondered.

Some seek to exploit the cause for U.S. foreign policy interests, Asat noted. Others, while committed to Uyghur rights, fail to recognize Uyghurs’ agency.

“There are people, well intentioned or not, who work on our cause and think they are best suited to determine the best solution for the Uyghur people,” Asat said.

For Asat, elevating the voices of Uyghurs is essential to fighting their persecution.

“I left thousands and thousands of the real heroes, the champions doing the real work.”

Alfred Brownell is an environmental human rights activist and lawyer from Liberia. He co-founded Green Advocates International, as well as one of West Africa’s largest solidarity movements — the Mano River Union Civil Society Natural Resources Rights and Governance Platform (MRU CSO Platform). His success fighting deforestation, multinational corporations’ seizure of indigenous land, and other forms of commodifying and exploiting indigenous lands and peoples made him a target of dangerous backlash. In 2016, Brownell and his family were forced to flee Liberia.

“My kids came in shower slippers, smuggled out of our home,” Brownell said.

“When I fled Liberia, I left thousands and thousands of the real heroes, the champions doing the real work,” he said.

Working from the United States “is a sword that cuts both ways,” Brownell explained. In the US, despite its “imperfections,” Brownell has found support and opportunity.

“There are things that are possible here that are not possible elsewhere,” he said.

The distance between Brownell and his activist partners is an obstacle, but he works hard to overcome it, relying on technology to stay connected.

“When I see that they are still hopeful, and they are waiting for change, then I have to find meaning to work for change.”

Mohammed “Musa” Mahmodi is an Afghani human rights defender and lawyer who served as the Executive Director of the Afghanistan Independent Human Rights Commission. His work has generally focused on accountability, transitional justice, and minority rights in Afghanistan.

Mahmodi expressed how devastating it was to see the Taliban retake Afghanistan after 20 years of work he and others undertook to build structures that protect human rights.

Now, Mahmodi said, the Taliban have reversed this progress, denying human rights and oppressing women and minorities. It is a tragedy known to many in exile, Mahmodi suggested. “You see that the spring has turned to a cold winter in your country,” he said.

Mahmodi has been disappointed, he said, by the international community's failure to adequately respond to the crisis in Afghanistan. He finds resilience, though, in his connections with people still in the country. Despite intense repression, Mahmodi’s friends and colleagues continue to ask him for news of any coming changes or improvements.

“When I see that they are still hopeful, and they are waiting for change, then I have to find meaning to work for change,” he said.

Asat concluded the panel by sharing her approach to particularly painful moments.