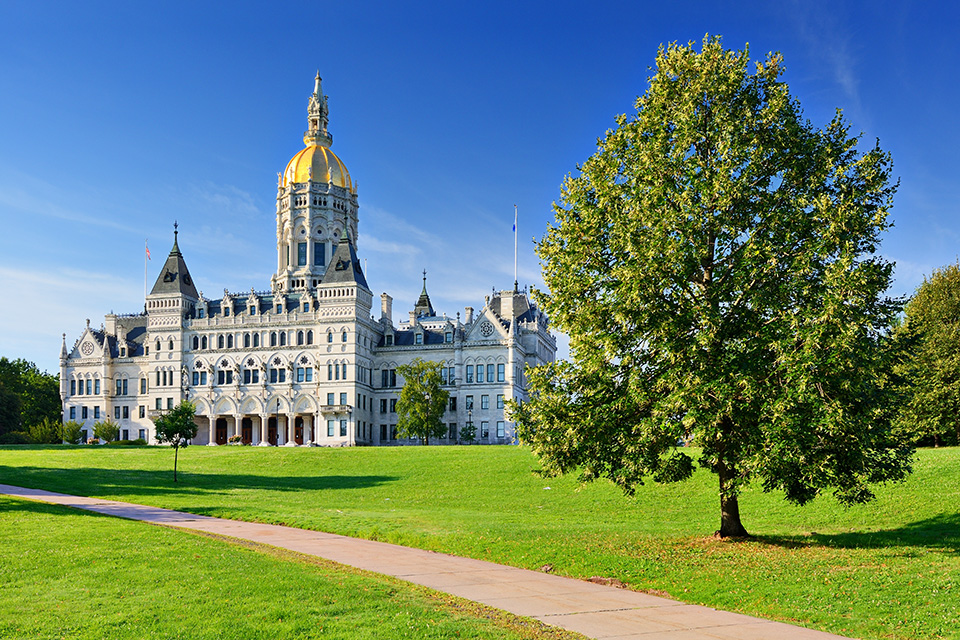 The State Capitol in Hartford, Connecticut.

The testimony argued against a recent series of bills aimed at rolling back juvenile justice reforms in response to a recent increase in juvenile crime. The proposed reforms included amendments that would lower the minimum age for children charged with certain crimes to be transferred to adult courts and make it easier to detain children pretrial.

Under the supervision of Clinical Associate Professor of Law Miriam Gohara, law students Avi Feinsod ’24 and Rachel Ruderman ’24 wrote testimony arguing against these proposals. Their testimony highlights how the bills rejuvenate ineffective and harmful “tough on crime” policies, ignore newer and more effective models of accountability, and do not do enough to attend to underlying drivers of crime.

In their testimony, Feinsod and Ruderman wrote that “tough on crime” approaches against children are unjust, as Connecticut Supreme Court and U.S. Supreme Court rulings have concluded that children deserve more leniency than adults.

“Studies show that incarcerating more people actually does not reduce crime, especially among children, for whom data have shown detention renders them more likely to commit future offenses,” said Feinsod.

According to the testimony, the Centers for Disease Control and Prevention found that “transfer [of children] to the adult criminal justice system typically increases rather than decreases rates of violence among transferred youth.”

The testimony also cites evidence that children “age out” of crime, so transferring children to adult court actually increases recidivism, as “only 10 percent of serious juvenile offenders become adult criminals.” Transferring children to adult court is especially dangerous, according to the testimony, because in Connecticut, children who are transferred are detained at the state’s Manson Youth Institution. The facility is currently under federal oversight because it has failed to provide mental health and special education services, and for violations of young people’s constitutional rights, according to the testimony.

Instead of increased detention and harsher punishments for children charged with serious crimes, the student team suggested Connecticut implement alternatives to incarceration that have been successful in other states.

“Intensive rehabilitation centers and educational and behavioral treatments are non-carceral solutions that work to prevent crime and are cost-effective,” said Ruderman.

In their written testimony, Feinsod and Ruderman write that children “deserve to be provided with opportunities for healing and treatment, even as they are held accountable and required to restore the people and property they harm. Harsh punishment of children, including increased incarceration, neither makes victims of crime whole nor provides the therapeutic interventions and economic supports that will help young people who break the law to better cope with their adversities.”

Feinsod and Ruderman worked in collaboration with Connecticut Voices for Children in preparing their testimony.

Voting on the proposed bills could take place in the coming weeks.

The Criminal Justice Advocacy Clinic (CJAC) of the Jerome N. Frank Legal Services Organization at Yale Law School represents individuals and organizations affected by the criminal legal system. The work of the CJAC is supported by the Millstone Fund for Criminal Justice Reform.