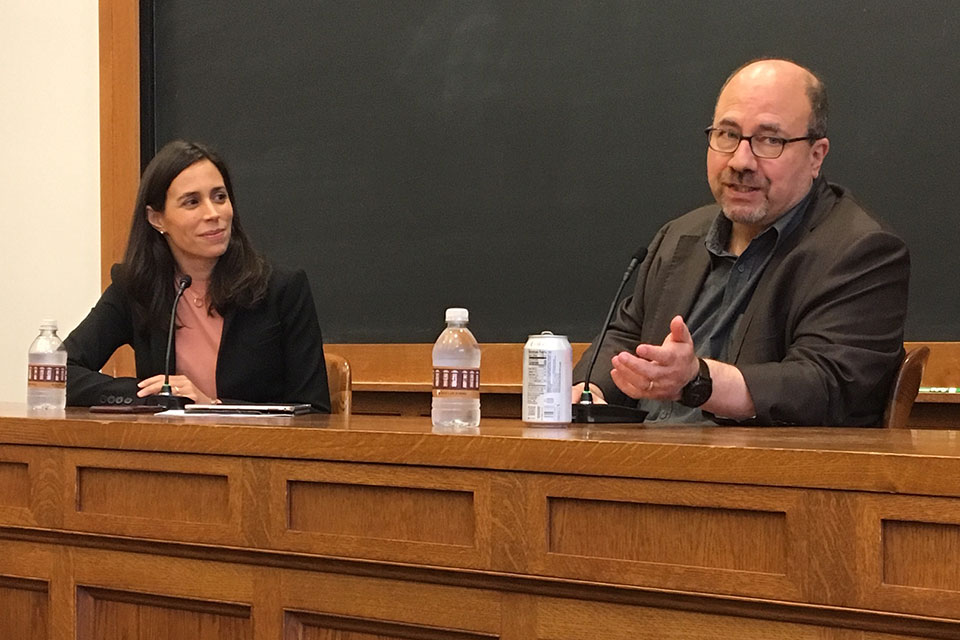 For Craigslist founder Craig Newmark, life boils down to three simple words: do unto others. “We all know the rest of that phrase,” Newmark said at Yale Law School in October, “but following through on that is the hard part.”

Newmark learned that lesson young, he told the Information Society Project (ISP), which hosted his talk titled, “Journalism, Ethics, and Trust in a Time of Misinformation.” He explained that, starting in Jewish Sunday School, he was taught the value of giving back.

Even Craigslist, the community-based website focused on classified ads, began this way. Newmark was working his way up in the world of software development in the 1980s and 1990s and realized that a lot of people helped him out along the way, which prompted him to begin a simple mailing list to try to give back.

In conversation with ISP Fellow and investigative journalist Pilar Velasco, Newmark described how Craigslist started with a list of available software tech jobs. He then expanded it to the rest of San Francisco in 1996 as a web-based platform, and in the year 2000, it reached the rest of the country.

Newmark opted to only monetize the site minimally, which resulted in opening up the site to more users. This allowed him to see what matters most to people, breathing life into his passion of helping others. In 2016, he founded Craig Newmark Philanthropies to advance people and grassroots organizations that are “getting stuff done” in areas that he sees as strengthening American democracy by supporting the values the country aspires to — fairness, opportunity, and respect.

Newmark elaborated on the matters that most speak to him as a philanthropist — issues involving trustworthy journalism and the information ecosystem, voter protection, women in technology, and veterans and military families. Newmark is committed to developing frameworks for ethical funding and fostering trust in journalism, which has become more important than ever in preserving the democratic process. As misinformation challenges our institutions, the public sphere, and democracy, journalism plays a crucial role in holding power accountable, he explained.

“My current philosophy is ‘better journalism, better technology,’” said Newmark. “Understanding information warfare is my new thing.” Newmark addresses the information ecosystem from all angles, supporting organizations that address these issues. He recently donated $20 million to the CUNY Graduate School of Journalism, which now bears his name.

“A trustworthy press is the immune system of democracy,” Newmark explained. His high school history teacher instilled a deep respect for the constitution and the American system of government, which has only grown stronger over the years.

As a self-professed “pocket-protector wearing computer nerd” who, in fact, used to have tape in the center of his glasses, Newmark tries to see the writing on the wall. “The new front line of the battlefield is information distribution and production,” he said. “You don’t win wars with bullets anymore; knowledge is key.”

Newmark explained that, in the current iteration of the information age, the best way he can fulfill his mission is to treat others the way he’d want to be treated. And the best way he can think to do that is defending the institutions that most hold up our democracy — like voting and journalism.

“As someone who created a large communication platform,” Newmark says, “I’m aiming to be part of the solution, not the problem.”

Newmark serves on the board of directors of a number of organizations, including Blue Star Families, the Center for Public Integrity, Craig Newmark Graduate School of Journalism at the City University of New York, Girls Who Code, Iraq and Afghanistan Veterans of American, Poynter Foundation, Sunlight Foundation, VetsinTech, and Women in Public Service Project. He also serves on the Board of Overseers of the Columbia Journalism Review and on the advisory board of nearly twenty other nonprofit organizations, including DonorsChoose.org, EFF, New America Foundation, Voto Latino, Wikimedia Foundation, and Women Who Tech.