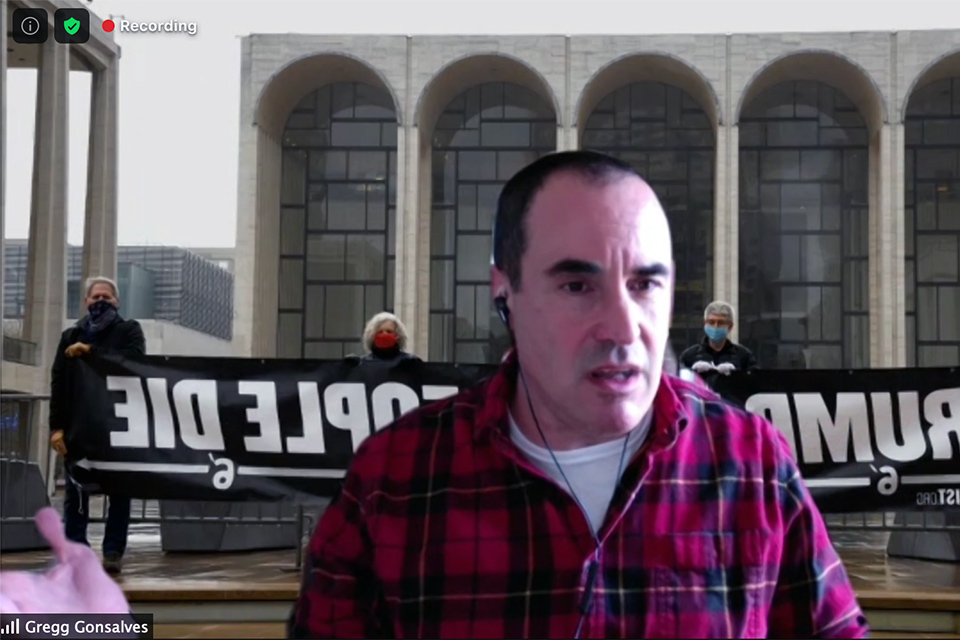 Gregg Gonsalves argued that public health and politics are inextricable, particularly for Black communities in the United States.

Yale Associate Professor in Epidemiology of Microbial and Diseases and Co-Director of the Global Health Justice Partnership Gregg Gonsalves led the September 17, 2020 Human Rights Workshop, titled “Pandemic and Social Movements,” on the connections between two ongoing public health crises — the COVID-19 pandemic and state violence against Black people in the United States. Gonsalves argued that public health policy is inextricable from political efforts for economic and racial justice, a point he highlighted in his recent paper in the Boston Review.

“We have a quarter of the world’s [COVID-19] cases,” Gonsalves began. “Nobody could really predict the almost 200,000 deaths and over 6 million infections [in the U.S.].” He described how many Americans are still not in their offices and are “sequestering in place,” wearing face masks, and following other public health guidelines to protect themselves and others. He lamented that the pandemic has perpetuated the “voluntarism fantasy,” which suggests that individuals, markets, and private charities — not the government — are responsible for protecting citizens.

Gonsalves traced “the roots of this crisis” to Reaganism and other examples of “white ambivalence in healthcare policy” that advanced the voluntarism fantasy. Even though many people “do not have the luxury to remain safe,” he said, the U.S. government has repeatedly absolved itself of any responsibility to establish a robust health and social services safety net. “Public health [infrastructure], which we needed in order to prevent COVID,” Gonsalves said, “was never prioritized in any administration.” He explained that the failure to create a safety net has been a “bipartisan mistake.”

The pandemic’s toll, Gonsalves said, is also related to race. According to Gonsalves, in addition to being influenced by biology, health outcomes are “socially determined.” The conditions in which people live and work — including their education, physical environment, employment, and access to health care — determine their health. Due to structural inequality, Gonsalves explained, there are racial inequities in health outcomes.

“We’re talking about COVID, but we’re also talking about American history and the foundations of how we live today,” Gonsalves explained. Referring to remarks this year from the U.S. Secretary of Health and Human Services Alex Azar, who blamed the “poor health” of communities of color for their high COVID-19 death toll, Gonsalves connected the victim-blaming of Black communities suffering from COVID today to a legacy of racism encompassing 19th-century legislators’ assertions that recently freed Black slaves were destined for the “inevitable fate” of “extinction” and President Ronald Reagan’s use of the imagined “welfare queen” to inflame prejudice against Black women receiving social services.

For Gonsalves, the way forward is to develop a “new politics of care.” To slow the virus and effectively protect healthcare workers and vulnerable populations, he explained, a “critical mass of people” needs to be able to stay home when sick — a measure that is currently unrealistic because “30 percent of private sector workers and 69 percent of lowest wage jobs have no sick pay.” Without universal sick pay or income insurance, “swathes” of Americans are unable to stay home and protect themselves and others against the coronavirus. Other kinds of social support, such as salary subsidization, are needed for people to cope with unemployment and other effects of the crisis like eviction and student debt payments. Gonsalves asserted that a robust public health safety net — the kind which “neoliberal Democrats and Republicans love to hate” — needs to be built in the coming years to ensure Americans can protect their health in times of crisis.

Gonsalves highlighted the particular issues facing people in prison during COVID-19, observing that prison is one of the “worst places to be in a pandemic.” He explained that it is impossible to social distance and follow other public health guidelines in a prison, and he criticized Connecticut Governor Ned Lamont’s refusal to decrease the number of people in prison. Gonsalves argued that state prisons and federal correctional facilities, including those where U.S. Immigration and Customs Enforcement detainees are held, are “pushing people in the path of this epidemic with no regard for their human rights.”

In light of human rights violations such as these, Gonsalves rejected the claim that “highlighting systemic racism is not focusing on the ‘real’ work during COVID.” Instead, he embraced the idea that anti-racism has become “a part of the public health equation.” Systemic racism, he said, is a public health issue. Because police violence is a “competing risk” alongside COVID-19 for Black people, it needs to be addressed simultaneously — hence Gonsalves’s and other public health experts’ support for the large-scale Black Lives Matter protests taking place during the pandemic. (The epidemiological evidence, he added, showed that Black Lives Matter protests did not spark a new wave of COVID-19 cases.)

“Colorblindedness” in public health, Gonsalves said, is yet “another way to promote racial inequality.” While politicians “want to divorce racism from public health,” Gonsalves believes that there is a “new politics of care being called for and embodied on the streets across the country,” as people are demonstrating their “rejection of Black extinction.”

“We are dying of COVID, but we are also dying of whiteness,” Gonsalves concluded. “Say their names, say the names of people dying from police violence...this is our plague since our nation’s founding.” For Gonsalves, “confronting the history of racism and white supremacy” is “inextricably linked to moving forward and addressing our future.”