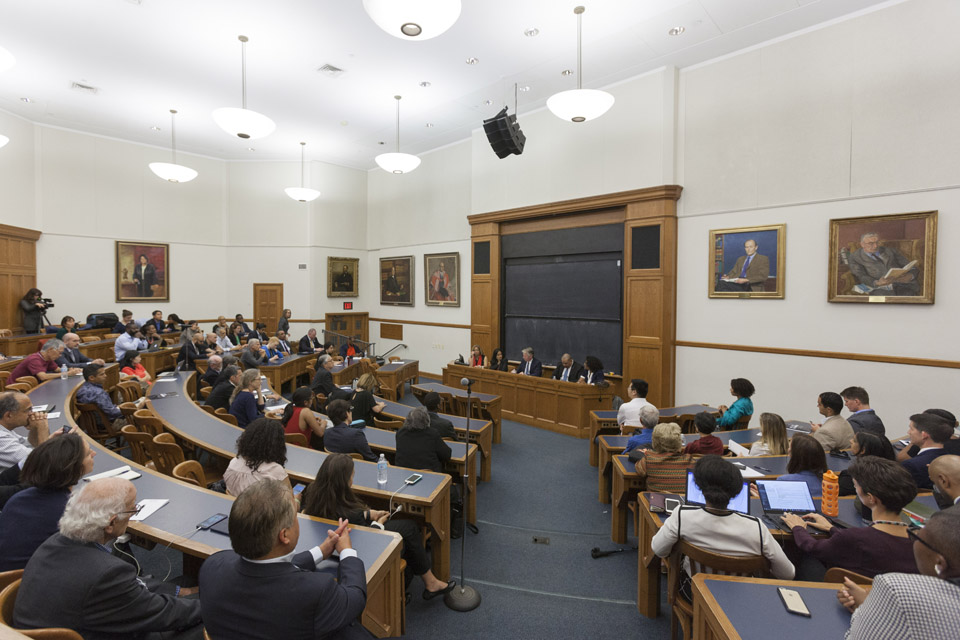 On October 5-6, 2017, the Justice Collaboratory at Yale Law School hosted the Moving Justice Forward conference, which convened an expert team of scholars, policymakers, and practitioners to discuss innovations and advances in criminal justice reform efforts over the last decade. The conference also sought to develop strategies to continue the forward momentum of these efforts.

The conference keynote panel titled “Advancing Criminal Justice Reform in the Absence of Federal Leadership” featured prominent champions of modern criminal justice reform: Karol Mason, President of John Jay College of Criminal Justice; Ron Davis, Principal Consultant at 21st Century Policing; Vanita Gupta, President and CEO of The Leadership Conference on Civil and Human Rights; and Cy Vance, New York County (Manhattan) District Attorney. Tracey Meares, Walton Hale Hamilton Professor of Law and Faculty Director of the Collaboratory, moderated the engaging discussion of how criminal justice reform might advance without federal coordination and leadership and what states and local jurisdictions can do to fill the void. According to Ron Davis, “over the last 8 years, it wasn’t an administration force-feeding change to an industry; it was an administration leading change that an industry wanted.”

Several important themes that emerged from the conference included: 1.) The need for federal involvement was overstated and the vast majority of criminal justice policy and reform happen at the state and local levels; 2.) The collaborations and partnerships that were developed during the Obama administration are durable and will continue to benefit from the frameworks and guidance provided; 3.) Research, data, and evidence must continue to drive policy discussions and decisions. Organizers said this is of particular importance under the current Trump administration who seeks a return to strategies that are proven counterproductive.

The Justice Collaboratory is committed to enhancing the legitimacy of the system and reform efforts by increasing trust among individuals, communities, and the state. In order to forward this vision, the private sessions of the conference were organized into thematic working groups designed to enhance multi-disciplinary dialogue across sectors that often intersect the criminal justice system such as education, health care, and community development.

Recommendations coming out of the working groups are currently being reviewed and developed into an action agenda intended to guide collaboration and provide next steps for the Justice Collaboratory to forward its mission. The Moving Justice Forward conference has highlighted how key players in state and local government, academia, philanthropy and the community might coordinate, collaborate and mobilize to fill a critical role to advance innovative criminal justice reform efforts.