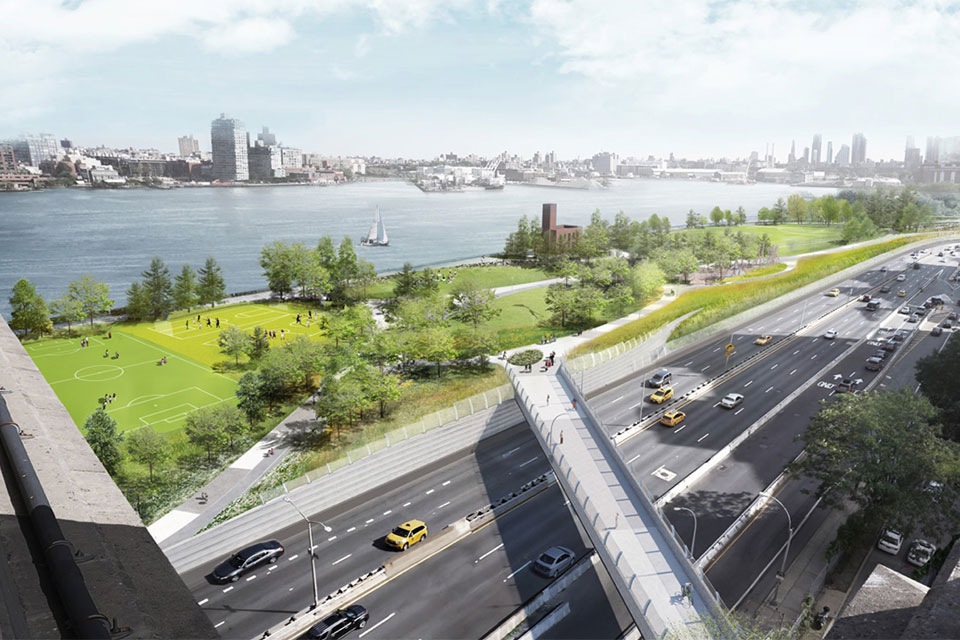 A rendering of the East Side Coastal Resiliency Project in New York City, part of a flood protection system planned after Hurricane Sandy. Hilary Meltzer ’92 says the city has been at the forefront of municipal climate mitigation and resiliency efforts.

After five years studying and soliciting comments on how to eliminate more than five tons of mercury discharged annually by dental offices into public waterways, the U.S. Environmental Protection Agency (EPA) issued a final rule regulating the toxin’s disposal on Dec. 15, 2016.

The American Dental Association called the new rule a “fair and reasonable approach.” Even tiny amounts of mercury can cause irreversible damage to developing brains. According to the Natural Resources Defense Council (NRDC), which submitted public comments in support of the rule, a single gram of the metal can make fish in a 20-acre lake unsafe to eat.

Nevertheless, on Jan. 23, 2017, the day before the rule was scheduled for publication in the Office of the Federal Register, the EPA withdrew it as part of a major deregulatory push initiated by the White House.

NRDC sued the Trump administration over the decision on Feb. 1, arguing that repeal of the regulation required notice and public comment, just as enactment of the rule had in the first place.

By June 2017, the rule had been reinstated and the lawsuit had been voluntarily dismissed. As Margaret Hsieh ’11, NRDC’s lead attorney on the matter, had argued in her motion for summary judgment, EPA’s withdrawal of the rule was difficult to square with legal authority, including a 1977 memorandum opinion from the Department of Justice’s Office of Legal Counsel pronouncing the finality of rules of a similar status.

“The new Administration tried to claw back everything it could from the prior administration, and, in the course of doing so, it was very hasty and ignored a lot of procedural requirements,” Hsieh says.

If the world is — however belatedly — waging a war on climate change and environmental degradation, it seems hard not to conclude that the U.S.’s public position has been one of retreat. Retreat from the 2015 Paris Agreement on climate change. Retreat from — and indeed an attack on — some of the very science necessary to win the war. And retreat from rules like the one Hsieh and NRDC fought to keep in place.

Citing NRDC statistics showing that the organization has engaged in more than 85 cases challenging deregulatory actions taken by the Trump administration, Hsieh says she and her colleagues so far have been successful in 31 out of 38 that have been resolved either preliminarily or with a final judgment.

And Hsieh is just one of many Yale Law School graduates stepping up in the fight against climate change from the public, private, and nonprofit sectors. And her method — litigation — is just one of many strategies being used to push for progress. Other graduates are implementing climate mitigation and resiliency plans at the level of local
government, helping green energy companies grow their business by acting as outside advisors, and working with countries and companies to highlight environmental policies that produce results.

According to Yale Law School Professor Daniel C. Esty ’86, director of the Center for Environmental Law and Policy, all those talents and more will be needed to move the world in a more sustainable direction, no matter who is in the White House.

“The 21st century is going to require new strategies, including a new emphasis on bottom-up efforts” from state and local governments, corporate leaders, and non-governmental organizations, Esty says, adding that over-reliance on national governments to create standards has resulted in regulatory rigidities and, in many cases, has been ineffective.

He speaks from experience.

After graduating from Yale Law School, Esty devoted his billable hours at a firm to trade and business issues but spent much of his pro bono work litigating on behalf of  environmental groups and efforts, including the “save the whales” campaign. Next, he went to the EPA under President George H.W. Bush. (In meetings, he used to shock people who made assumptions about him as a Bush appointee by saying, “When I was a lawyer for Greenpeace….”) When the first United Nations treaty on climate change was adopted in 1992, Esty was one of the U.S. negotiators.

But he’s since come to believe change has to bubble up, not trickle down. 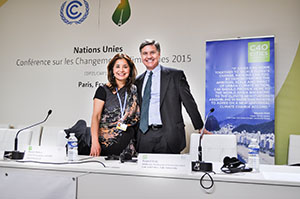 “It turns out that the 1992 Framework Convention relied too heavily on national governments setting targets and timetables and not enough on having real strategies and policies that changed behavior and paid attention to the incentives for shifting toward a sustainable future,” he says.

Over the past two decades, Esty has tried to build momentum for the bottom-up approach he now believes is crucial. At the Yale Center for Environmental Law and Policy, which Esty founded when he joined Yale Law School in 1994, the focus is on regulatory reform, corporate sustainability, environmental performance measurement, global climate governance, sustainable finance, and trade/climate change interface. In the runup to the 2015 Paris Climate Agreement, for instance, the center convened a group of thought leaders from around the world who gathered to develop and discuss private sector and sub-national government solutions to climate change adaptation and environmental protection, some of which were included in the final agreement.

Esty says the Trump administration’s focus on economic impacts and who “bears the burden of environmental protection” could have produced useful reforms. But, he continues, “there is so little seriousness of purpose about doing environmental protection at all, that its raising of some of these other issues can’t be taken seriously.”

For that reason, Esty says, the need for a decentralized approach to climate change adaptation strategies is even more necessary now. But he says it’s important to spread responsibility across all sectors of society no matter who is in power at any given moment.

“We need a strategy that emphasizes action by all of the players who have something to contribute,” he says. “It turns out that presidents and prime ministers don’t have their hands on many of the levers that determine the carbon footprint of a society.”

Leading at the State and Local Level

Everyone agrees that for real progress to occur, all parties have to work together. In 2016, Massachusetts passed a state law requiring utilities to buy a certain amount of wind energy, setting the stage for Vineyard Wind to develop an 800-megawatt offshore plant, the first such project in the nation. The company estimates its wind turbines will power more than 400,000 homes and reduce carbon emissions by nearly two million tons per year. 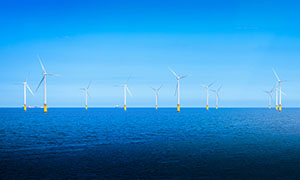 “That’s a tremendous amount of energy,” says Mark A. Barnett ’04, co-chair of the energy and cleantech practice and head of the firm’s renewable energy project finance and development practice at Foley Hoag, which represents Vineyard Wind. “Massachusetts passed a really good law to try to create opportunities to get this industry off the ground.”

Likewise, New York City is moving ahead with a number of resiliency projects to protect the city and its residents from the impacts of climate change, including two pilot projects to manage extreme rainfall events near public housing complexes, designed in partnership with the city of Copenhagen. New York is also working with the U.S. Army Corps of Engineers to construct a 5.3-mile seawall to protect communities on Staten Island.

Hilary Meltzer ’92, chief of the New York City Law Department’s Environmental Law Division, says the city has been at the forefront of municipal climate mitigation and resiliency efforts since Mayor Bloomberg was in office and that it takes that responsibility even more seriously under Trump.

“We want to be a leader,” she says. “Cities are inherently efficient in terms of per capita greenhouse gas emissions, but they also have an opportunity to do more. We should be concerned about sustainability under any administration, but it becomes all the more important to be the drivers when they’re not getting support from the federal government.”

In January, the city joined several states, including New York, in petitioning the U.S. Court of Appeals for the D.C. Circuit to review an EPA decision finding that 20 “upwind” states do not have to take additional measures to reduce their pollution, which affects “downwind” states’ air quality. The decision, made under the Trump administration, reversed an earlier decision under Obama.

A Multiplicity of Strategies

Stepping in when regulators are unable or unwilling to enforce even existing laws is a fundamental part of environmental advocacy, says Mark N. Templeton ’99, director of the Abrams Environmental Law Clinic at the University of Chicago Law School.

“I want to affirm the idea that we need a multiplicity of strategies,” Templeton says. “Policy proposals. Rulemaking. Collaborative approaches. I support all of those. But sometimes you need to carry a big stick.”

Enforcement agencies such as the EPA don’t have the resources to bring every case that needs to be brought, even when they have the best intentions, he says, and environmental laws, including the Clean Air Act and the Clean Water Act, were designed to allow citizens to sue.

“Congress recognized that sometimes enforcement agencies may not always do their job,” he says. “We have made a lot of progress on some of the most obvious and most egregious environmental issues. We pretty much don’t have rivers catching on fire anymore. But we’ve gotten hung up on the problems that are more complicated to solve.” 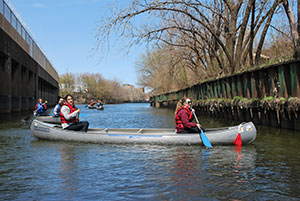 Data makes those problems easier to see, he says. When watchdog groups in the Chicago area looked at information on the Illinois EPA website, for instance, they noticed that the Trump International Hotel and Tower had been drawing water from the Chicago River to cool its facility without conducting the proper impact studies. The clinic gave notice to the Trump Organization that it was out of compliance. The state intervened to sue, and now one of Templeton’s students is helping to handle settlement negotiations in the case.

“The agencies vomit up this information,” Templeton says. “You have to go find it, figure it out, and act on it.”

Esty agrees that data will be transformative in the fight against climate change. Students in his center are incorporating data analysis into the center’s biennial Environmental Performance Index, now in its 10th iteration, which ranks countries’ performance on environmental policy goals, and are trying to use data to identify a path for sustainable finance.

“Investors are saying, ‘I want better alignment between my values and my portfolio,’” he says. “We have a series of projects going on through the new Yale Initiative on Sustainable Finance to try to help those investors get the information they need and want to bring that alignment to bear, which we think over time will flow capital toward companies doing better on sustainability.”

Each of these graduates, working in different ways and in different industries to help address the same global problem, credits Yale Law School with preparing them for the hard work of tackling so complex an issue.

The work is challenging, but Hsieh says she is “excited to go to work every day.”

“It’s frustrating,” she says. “There is definitely so much happening that’s discouraging. But I feel 100 times better that my job allows me to fight back on a daily basis, versus sitting on the sidelines and wringing my hands.”

It’s also nice to know people care about what she does. When Hsieh was challenging the mercury rule withdrawal, she received an anonymous letter in the mail.

Inside the hand-printed envelope, was a copy of the 1977 Office of Legal Counsel (OLC) memorandum opinion she had already found and cited in her motion for summary judgment.

“It looked like a ransom note,” she laughs. “Someone had sent me that OLC opinion — someone in Maryland or Virginia, probably someone from the EPA or DOJ who was in the know. It felt very encouraging to know that there were people out there — including within the government itself — who were interested in and supported our work.”