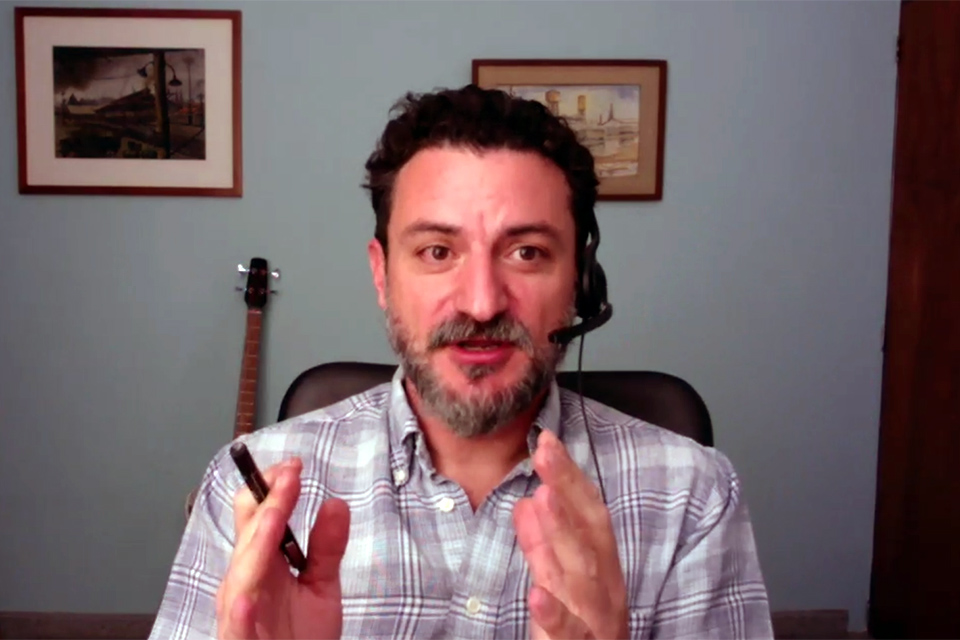 Pérez-Correa, Professor and Researcher of the Division of Legal Studies at the Centro de Investigación y Docencia Económicas (CIDE), described how Mexico’s war on drugs has become increasingly militarized since 2006. Over the past 16 years, the military has joined civil forces tasked with stopping the flow of narcotics to the U.S.

Under President Felipe Calderón, Pérez-Correa said, 5,000 soldiers were deployed to assist police in the state of Michoacán, followed by other joint operations in the city of Tijuana and the state of Guerrero. In all, Calderón’s administration deployed over 50,000 soldiers across the country to combat drug trafficking. The next president, Enrique Peña Nieto, followed in Calderon’s footsteps, as did the current President Andrés Manuel López Obrador, known as AMLO.  By the end of 2020, ALMO deployed 128,000 soldiers, Pérez-Correa said.

Citing data from studies conducted by Madrazo and other colleagues at CIDE, Pérez-Correa reported that as a result of the escalating militarization in recent years, homicides and femicides have risen.

“Not only have we seen how homicide was linked to militarization, but there’s also a causal relationship to this rise in crime,” she explained, “The number of homicides at the municipal level [increased with] each shootout between public forces and alleged criminals ... if armed forces participate, the effect is even higher.”

From 2006 to 2017, she continued, at least 329,917 people were displaced, fleeing the dramatic uptick in violence and threats militarization brought to their communities. She also highlighted Estefania Vela Barba’s work, which demonstrates that militarization disproportionately harms women by causing a sharp rise in gender-based violence. (For more information on Vela Barba’s work, read about her February 2021 virtual talk at the Schell Center.)

Madrazo, a Professor of Law at CIDE, agreed with Pérez-Correa’s conclusions.

“Researchers have pinpointed that the best explanation for the violence is the presence of joint operations led by the government.”

Using a verified “secret database,” Madrazo and other researchers looked into the description and cause of each shootout.

“In broad numbers, 84% of the shootouts were begun by authorities,” Madrazo noted. Alleged criminals had begun only 7% of the shootouts, as self-reported by the government in this database, according to Madrazo. The largest cause of shootouts — 31% — was federal forces patrolling the streets and profiling civilians as “suspicious,” he said. Madrazo added that the military is constitutionally banned from patrolling the streets.

Fully armed soldiers can also enter and shoot inside a building based on an anonymous call, without a judicial order, Madrazo said. Only 2% of those shootouts result from genuine illegal activity, he said.

“The war on drugs ... persecutes and incarcerates people who have no prior convictions and who are transporting small amounts of drugs, and, [after their arrests, they] are quickly replaced by other people,” she said.

Madrazo pointed out that when forces do in fact kill or capture a cartel kingpin, there is an uptick in violence as a result of the fragmentation of groups. He also addressed the constitutional costs of the war on drugs for Mexico’s legal system. The war on drugs, he argued, is eroding the legitimacy of Mexico’s Constitution by relying on flagrantly unconstitutional practices. One law that Madrazo considers unconstitutional is the arraigo, a mechanism which allows the government to detain individuals for up to 80 days without formal charges and without the right to legal representation. The Supreme Court of Justice of the Nation ruled the use of arraigo in the Criminal Code of the state of Chihuahua as unconstitutional, he said. Yet, despite the ruling, the practice continues.

“Our constitution has always been explicit ... in times of peace, the military will limit itself,” he explained.

Therefore, the use of the military for everyday policing in the streets, he argued, is unconstitutional. Since 2006, he said, the military has been conducting police work with “no constitutional foundation.” In its defense, according to Madrazo, the government cited an opinion summary from the Supreme Court of Justice of the Nation, which stated that it is constitutional for the military to do “auxiliary work.” However, Madrazo pointed out, the military is actually “leading the operations.”

“The opinion said they could be auxiliary as long as they are subordinate,” Madrazo said. “The constitutional costs creep in ... this is a very convenient interpretation at a very high level. There is no venue to challenge that legal interpretation of the president.”

A third constitutional cost Madrazo cited was AMLO’s militarizing of the National Guard against the Mexican Congress’s will.

“This administration comes in and there’s such a bad public opinion of the military,” he said.

Nonetheless, AMLO “proposed to make the National Guard a branch of the military in charge of public security.”

When Congress rejected his proposal, AMLO instead made it a “civilian body” whose budget is controlled by the Ministry of Defense. That budget structure made the National Guard part of the army in all but name, Madrazo explained, and it was quickly militarized.

“For three years, the president has been openly violating the constitution,” he said. “Now, he wants an amendment to accept that [the National Guard] is part of the military.”

Madrazo concluded that, in a poltically hegenmous system, Constitutional checks and balances are just a formality, easily overridden.

“The war on drugs has fed into this crisis and has created this erosion of the constitutional system ... that has now made the perfect storm for an authoritarian establishment,” he said.