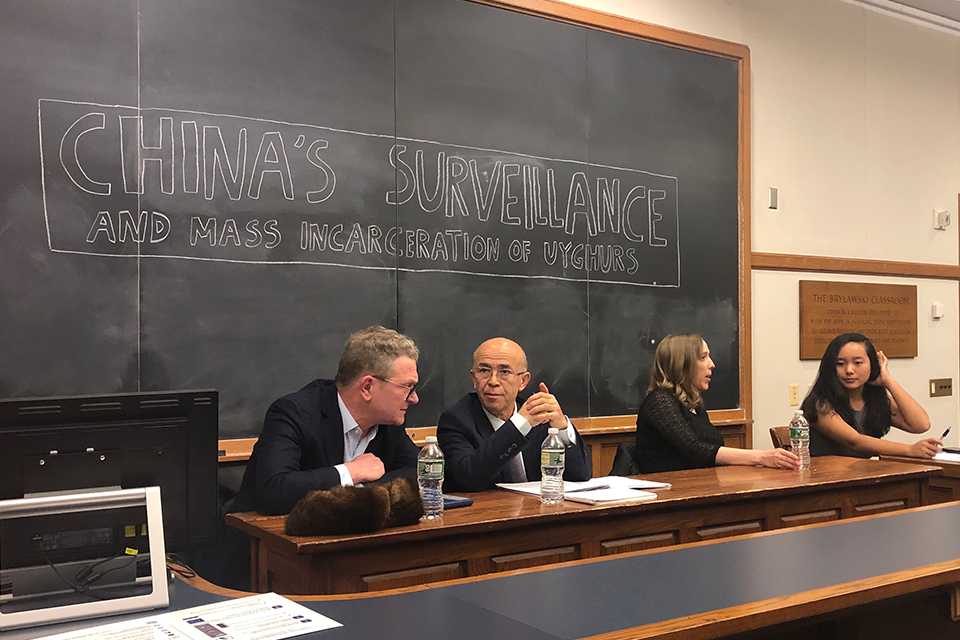 Panelists at a Schell Center discussion described abuses against the Uyghur people  by the Chinese government.

On March 5, 2019, the Schell Center hosted a panel focused on human rights abuses inflicted by the Chinese government on the Uyghur people living in Xinjiang province. The panel featured Bethany Allen-Ebrahim, an award-winning journalist who has written extensively on China; Omer Kanat, cofounder of the Uyghur Human Rights Project and the World Uyghur Congress; and Sean Roberts, a cultural anthropologist who has published a body of work on the Uyghur community.

The panelists began by stressing that the oppression of the Uyghurs goes back decades. Kanat noted that even calling the region where Uyghurs are suffering abuses Xinjiang reflects the subordination of the Uyghur community, because Uyghurs have been living in the region for thousands of years, whereas “Xinjiang is a colonial name for the region.” He added, “The land is the homeland of the Uyghur people,” and advocated referring to the area as East Turkestan.

The panelists agreed that the story of the Uyghurs’ marginalization stretched further back than the current crisis, but they focused on the drastic escalation of abuse in recent years. Though East Turkestan is a “near information black hole,” by a year ago, Allen-Ebrahim said, there was confirmation that a “gulag archipelago” was in “full swing.” China had constructed what they called reeducation centers, where they claimed to offer voluntary vocational training to Uyghurs. In actuality, Allen-Ebrahim said, these sites “are concentration camps.” Uyghurs are forced to attend Mandarin classes (even though many Uyghurs already speak the language fluently) and other classes that glorify the Communist Party or compel the Uyghurs to renounce their Islamic beliefs. These classes entail about four hours of sitting, then similar periods of time subjected to indoctrination in the form of propaganda videos that assert that Islam leads to terrorism. In another effort to repress the detainees’ culture, the Uyghur language is prohibited.

Based on accounts of the camps that Roberts had heard, “it’s very obvious that [the conditions] create incredible psychological duress.” People confined in the camps are not allowed to speak with one another and are subjected to intense surveillance. “If you’re seen in class fidgeting or not sitting up straight,” Roberts reported, “a big voice com[es] out of the speaker saying ‘Sit up!’ in Mandarin.” The goal of this environment, Roberts argued, “is not so much Chinese education but a psychological form of torture.” There have also been reports of physical torture and deaths in these detention centers, which Uyghurs are forbidden from leaving.

The scale of the camps is enormous, Allen-Ebrahim pointed out. It is believed that about one million people are confined in the detention centers. “At their peak,” she said, adding, “the Nazi concentration camps held about 750,000 people.” Ultimately, Kanat explained, this is a “massive campaign of cultural extermination.”

Roberts characterized the reeducation camps as a “different kind of ethnic cleansing.” Rather than “cleansing a territory,” the Chinese government is attempting to “cleanse the members of an ethnic group” of their culture. Kanat referred to government documents obtained by Agence France Presse that assert “the aim of the camps is to break [the Uyghurs’] lineage, break their roots, break their connections, and break their origins.” He warned, “it’s hard to read that as anything other than a declaration of genocidal intent.”

When asked what audience members could do to stop these human rights violations, the panelists stressed the need to further publicize and educate others about the plight of the Uyghurs and urged audience members to call their representatives and urge them to pass the legislative proposals now in Congress requiring that the U.S. take actions to hold China more accountable for human rights abuses against Uyghurs.