A group of Yale Law School students traveled to Drake University this September for the second annual Food Law Student Leadership Summit, an event that unites those sharing a passion for creating an equitable, transparent, healthy, and sustainable food system. The Summit included tours of local farms and engaging panels aimed at helping students deepen their understanding of key food law and policy issues by hearing from advocates, farmers, academics, practitioners, and lawmakers.

“The Summit made me really excited about food law generally, because we were able to see so many people working on these issues and to learn about the different facets of the field,” said Alexandra Schluntz ’18. “One of the seminars I attended was focused on racial inequality in agriculture, something I had never considered in those terms. So just to gain exposure to different ways of thinking about agriculture and food law was very valuable.” 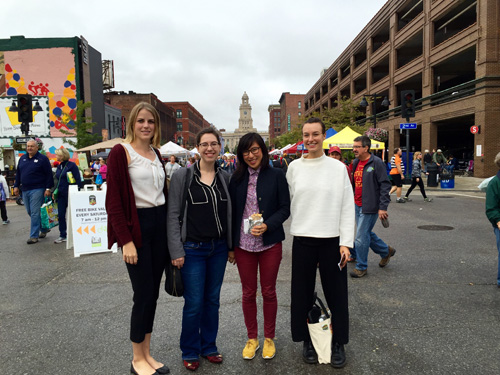 The four Yale Law students who were selected to attend are all members of a new and thriving student group, the Yale Food Law Society (FoodSoc), a nonpartisan community that promotes the study of and engagement with food and agriculture law and policy. The group was launched in 2014 by two YLS alumni, Lee Miller ’16 and Graham Downey ’16, to respond to a growing interest in this evolving area of law. Since then, it has become a flourishing group that hosts events and works on a variety of substantive projects throughout the year.

“When I arrived at YLS, there was no such thing as a food law concentration,” said Miller, who now supervises the National Law School Farm Bill Research Consortium through a Yale Law School Public Interest Fellowship. “Now there is a thriving community of students interested in food law; some came to YLS to pursue a career in food law, while others have engaged because they see how food law tangles with their passion, whether that's public health or racial justice or environmental protection.”

The administration has responded to the student interest by offering special courses on the topic. The first class on U.S. Food Law and Policy was offered in the spring of 2015 and taught by Visiting Lecturer in Law Emily Broad Leib, who directs Harvard University’s Food Law and Policy Clinic. This semester, former United Nations Special Rapporteur on the right to food Olivier De Schutter is teaching a seminar on The Legal and Political Economy of Hunger. These courses add further depth to an array of environmental and health law course offering already in place thanks to a strong partnership with Yale University’s School of Forestry & Environmental Studies and the Law School’s Solomon Center for Health Law and Policy.

The new academic opportunities are part of a larger wave of interest and activity surrounding food law at the Law School, which also includes clinical projects through the Environmental Protection Clinic and the Ludwig Center for Community & Economic Development Clinic.

Christine Kwon ’17, who has been active with FoodSoc and is a student fellow with the Solomon Center working on food law-related projects, said it has been exciting to watch a topic she is passionate about grow so fast at the school.

“One of the things I really love about food law is that because it is a relatively new area of law it uniquely positions students to make serious contributions,” said Kwon. “The fact that we are in school during this time is really exciting.”

Ruthie Lazenby ’19, a first year law student and FoodSoc board member, said she hoped FoodSoc would continue to strengthen relationships with other student organizations and emphasize to the Yale Law community how expansive food law really is as a discipline.

“Questions of intellectual property, antitrust, civil rights, labor law, health law, and environmental law are all crucial to food systems reform,” said Lazenby. “I think it is especially important to bring law students together early in their careers and to encourage interdisciplinary work, precisely because our food system is so interconnected and diffuse.”

One of the major initiatives taking place at Yale Law School involving food law right now is the Farm Bill Research Consortium that Miller oversees. Law schools around the country have teamed up to proactively develop some progressive policies for the Farm Bill, an omnibus bill that covers many different areas of food and agriculture and must be reauthorized every few years by Congress.

“What we are trying to do is promote local food, healthy food, and environmentally friendly farming practices,” said Josh Galperin, Director of the Environmental Protection Clinic, which is spearheading this project for Yale. “No one has ever really tried to do this before.”

With each school in the consortium taking on a section of the bill, Galperin and his students are looking specifically at Title X — Horticulture, which includes specialty crops, farmers’ markets and food hubs, and organics.

“We are learning as much as we can about that section and then we will be developing policy proposals for the next farm bill,” said Galperin.

Once the research and analysis is completed, each law school will draft a memo outlining its top policy proposals, which will be refined and further fleshed out during the spring semester. During the spring, faculty from each Consortium member school will convene in Washington, D.C., to promote the best proposals for the Farm Bill most likely to gain traction with lawmakers.

The clinic also tackles several other projects involving food law and policy, like helping the organization Earthjustice build out a food and agriculture law initiative, researching crop insurance programs, and examining the intersections between climate and agriculture.

The Ludwig Center for Community & Economic Development (CED) is another clinic providing opportunities for students to get hands-on experience working in food law and policy. The clinic works with CitySeed, a nonprofit that operates farmers’ markets in five neighborhoods of New Haven and is a founding member of the New Haven Food Policy Council.

The clinic’s work for CitySeed, spanning more than ten years, has included transactional legal work, regulatory legal work, and public policy advocacy. In addition to advising on legal issues surrounding operation of the farmers’ markets, the clinic has worked with CitySeed to research and analyze food policy and advocate for improvement in food-related laws and regulations.

Soul Fire Farm Institute, Inc. (“SFFI”), another group the clinic represents, is a nonprofit corporation that seeks to advance economic independence and racial equity by providing on-farm education and training in community food sovereignty, dismantling racism in the food system, and developing best practices for just and sustainable agriculture. The clinic represents SFFI in connection with organizational, tax, transactional and employment matters, including providing legal advice on the structuring and operation of its activities.

With these clinical and extracurricular experiences under their belts and armed with a law degree, Yale Law students believe they will have all the right tools they need to make a difference in the real world.

“I ultimately decided that a JD program would give me the tools to do impactful, good work and hone the core skills I have so that I can be really effective in my career,” said Kwon.

“Yale Law School has opened doors for me through its courses, clinical offerings, and the professional connections that come with those academic opportunities,” added Schluntz. “I think that a law degree allows for many options after graduation, and I’m looking forward to exploring those possibilities.”

Galperin said it has been remarkable to watch the interest and number of opportunities in food law and policy grow at the law school in such a short span of time.

“We are able to maintain programs and opportunities to keep us at the forefront at food law even though we are not producing research in that space,” said Galperin. “But we are creating a lot of opportunities for students. I think it’s important for students in particular to realize that this is a realistic model for being an important player in an academic space.”

Galperin added, “It’s not just what the faculty are doing, but what the students are doing.”