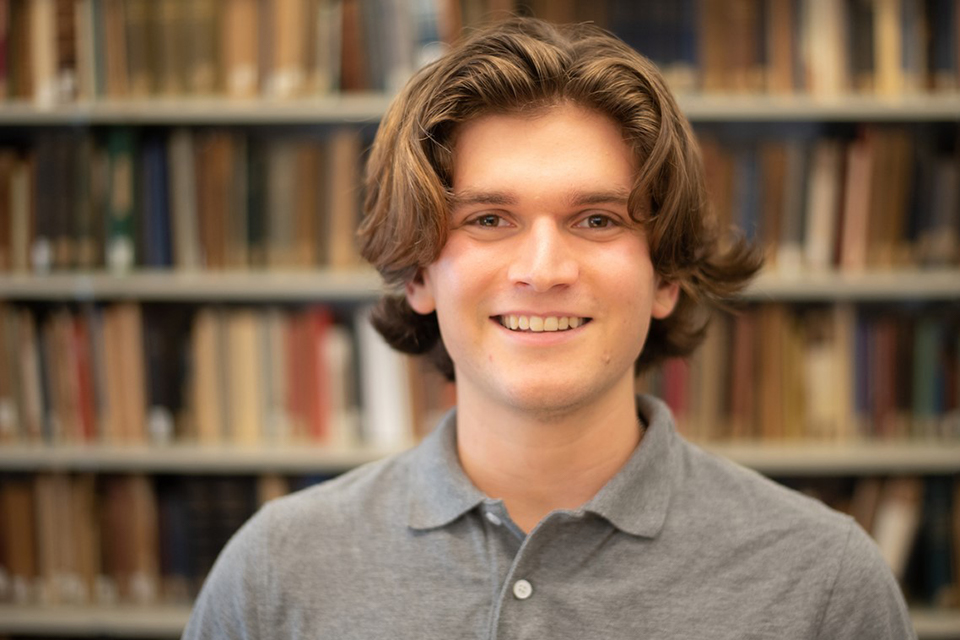 Noah Macey, the outgoing Program Fellow for the Law, Ethics & Animals Program, is also a a Master Beekeeper.

Noah Macey is the outgoing Program Fellow of the Law, Ethics & Animals Program. He has worked closely with LEAP’s faculty and staff since 2020 to support and grow the program’s multidisciplinary initiatives, research, and student programming.

“Noah is a brilliant thinker and doer, and he has been an outstanding member of the LEAP team for the past two years,” LEAP Executive Director Viveca Morris said. “Noah has been integral to many parts of the program’s work, from overseeing LEAP’s speaker series, to championing new initiatives like the LEAP student grant program, to contributing to research on the role of agribusinesses in the climate crises.”

Macey’s interest in the relationship between human and non-human animals began when he started keeping bees as a child in Atlanta. He graduated from Yale College in 2019 with a linguistics degree and is a Master Beekeeper through the University of Georgia Honeybee Program.

“It is with a very heavy heart that we say goodbye to Noah, who has been an immense source of support and inspiration for our program,” said LEAP Faculty Director and Joseph M. Field ’55 Professor of Law Doug Kysar. “The care and curiosity that he devotes to bees reflects the same ethic that he brings to all his engagements with the world. We have been so fortunate to have him in our community.”

To celebrate his time with LEAP, we spoke with Macey about the animals that first inspired his interest in lives of other creatures. This interview has been edited for clarity.

What fascinates you about bees and beekeeping?

I’ve long been an animal person. Sometimes I’ll read papers about animals that talk about how difficult it is to know what it is like to be another creature and the challenges of relating across species. With many animals, like companion animals and farm animals, I think those differences seem overblown. We’re far from clueless what their inner lives might be like. It’s difficult to imagine, but manageable.

Some people think insects are just biological machines with no experience, but many people who’ve looked into it (to the extent you can look into such things) disagree. And if so, bees —and insects generally — break all of our intuitions about what it would be like to be another animal. The forces that drove their evolution are not the same as what drove our evolution: the unit of natural selection — what evolution acts on — is the colony, not the individual bee. This leads them to sacrifice themselves for the colony through stinging, for example, which results in their death. In a mammal or bird, that sort of behavior should be selected against because it prevents reproduction and the passage of genes. But in eusocial insects like honeybees, the genetic unit is the colony, so self-destruction makes sense if it helps the colony reproduce. So the question of what would it be like to be a bee is just wild to me. It stretches the imagination. Beyond tasting with your antenna and your feet, a bee’s fears and motivations are shaped by a totally different relationship to their surroundings and colonies.

You’ve led several LEAP events focused on insects, including a panel on the insect population trends and a LEAP book club discussion on how bees are portrayed in fiction. You are also an instructor with New Haven’s Hunnebee Project, a local nonprofit that trains and employs New Haven youth in beekeeping and garden site maintenance. How do you approach teaching people about bees?

Most people have some experience with bees — almost everyone’s been stung by a bee or wasp at some point, or people at least eat honey. When I give hive tours, I try to use those encounters to get people engaged. I’ll ask the kids if they’ve seen Bee Movie, then tell them everything in that movie is wrong. There are no male worker bees!) Or I’ll ask adults to guess how many bees are in a colony. People generally guess 500 or maybe 2,000. The actual answer is 60,000 to 80,000 in the summer — it’s rare for people to overshoot. And I think starting with some of those surprising facts can get people to realize, oh, there are a lot of unexpected things here. And that builds a base for us to start talking about bee society and biology — how they gather pollen and produce honey, how they use static electricity to gather food, and more. I try to focus on the delightful facts.

Are there ethical issues with how bees are kept today that concern you?

Yes! The natural habitat of the species of bees that we keep, Apis mellifera, is a hollow tree. In nature, honeybees build up their honey stores, they’ll eat through the winter, and then they’ll swarm once or twice in the spring to send out some new colonies. Different sources give different numbers, but unmanaged colonies in the wild generally have a much lower survival rate than well-managed colonies. In its best form, beekeeping is basically looking after the welfare of wild animals: you create a hollow tree for these bees to live in and check on them periodically as they do their own thing, occasionally intervening to treat diseases or eliminate pests. If the bees create a surplus of honey — more than they need to make it through the winter — some honey can be taken. But if, for whatever reason, the colony doesn’t produce enough food to survive, a beekeeper can feed them sugar water to see them through the winter. In a lot of ways, beekeeping is more like plant farming than animal farming.

But oftentimes, incentives don’t align with this ideal. I think it’s possible that bees and humans can have symbiotic and positive relationships, but that becomes more challenging in large commercial operations. Large-scale operations want as many bees as possible, and you can’t achieve the same level of respect and care at that scale.

The amount of honey that the bees need to overwinter depends on geography and weather. In Georgia, where I’m from, bees need 40 to 60 pounds of honey going into winter. In Connecticut, they need more. The reason that we can sometimes harvest honey from bees is that they often run a surplus — they make more than they need to eat during the winter months when they’re unable to forage.

But in commercial-scale beekeeping, there is a tendency to take all of the honey that bees make and feed them corn syrup or sugar water. That’s not healthy. Bees are often placed in crop monocultures, which is likewise terrible for them — it would be like expecting humans to survive off just peanut butter or some other single food.

In the wild, bees generally work really, really hard for a few weeks in the spring to make a lot of honey. For the rest of the summer, they continue to bring in as much as they’re eating, and don’t pull down their stores, but they’re coasting compared to those weeks. This is disrupted by the commercial pollination industry. Bees are transported around the country in sync with the need to pollinate different crops. You might be a beekeeper with 500 different colonies who takes them to a cotton farm for a couple weeks, and then you transport them to Maine for blueberries, and then you take them to the Dakotas to get some clover and honey, and then you take them to California to pollinate almonds. So instead of working for a couple weeks intensely and then resting, these bees are constantly being moved and working, which is stressful on their health. The almond crop in particular is crazily bad for bees. A large percentage of all of the bee colonies in North America are gathered in the same region of California for the almond pollination season every year. That is a bee public health nightmare. They’re exchanging diseases, mites are jumping between colonies, and so on.

So I think it’s possible for there to be a mutually beneficial relationship between humans and bees, but the economic incentives at the commercial level are misaligned. That said, honeybees are critical for our farming system, so there is a lot of economic incentive to protect them on the species level. That’s not true for many types of wild, native bees, some of which are at major risk of population collapse and extinction. Climate change is expected to compound these challenges.

Along with science and policy related to food systems and animal protection, you’re deeply interested in language, especially cognitive semantics and phonetics. What elements of bee communication are most interesting to you?

Human language is totally different from how bees communicate, but it’s neat to see how species solve similar problems across vast evolutionary gaps. Much of their communication happens via pheromones, but they are also symbolic communicators. When they want to convey the location of a food source, they do a dance called the “waggle dance” that encodes the direction and distance of the food to the hive. They fly back to colony and dance in a circle, cutting across the circle. The angle between that, cut across the circle and the top of the frame of the hive, is the same as the angle between the sun and the food source. The other bees will exit the hive and find the food source based on this dance. That is an incredible feat of communication, especially when you realize the hive is pitch dark on the inside and their brains are miniscule.

What is an important lesson that you have learned from bees and your experience beekeeping?

The lesson I always think about is understanding the cost of too much intervention. New beekeepers often want to open up their hives all the time and check on the bees. But excessive attention is counterproductive — it takes honeybees a while to get back to normal after intrusions to their hive, and their discombobulation interferes with honey collection, raising larvae, and other normal hive functions. When I talk to new beekeepers about inspecting a hive, I always try to hammer home that when they’re messing with the bees, they should have a good reason and know exactly what they’re trying to accomplish. I’ve found that to be a useful lesson in life. 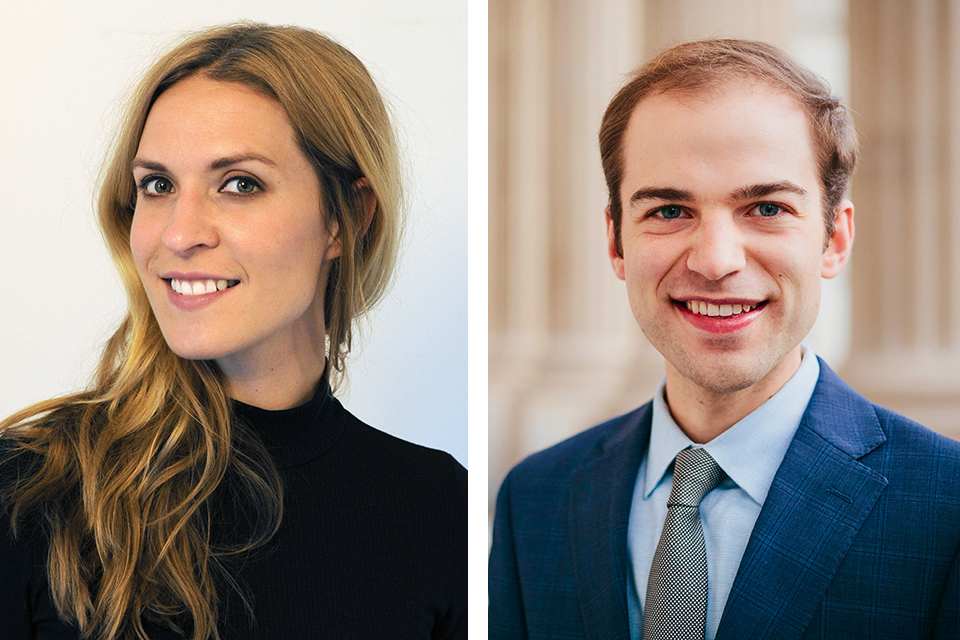 Emma Findlen LeBlanc ’24 (left) and Thomas Poston ’24 have been named Emerging Scholars Fellows with the Brooks Institute for Animal Rights Law and Policy.