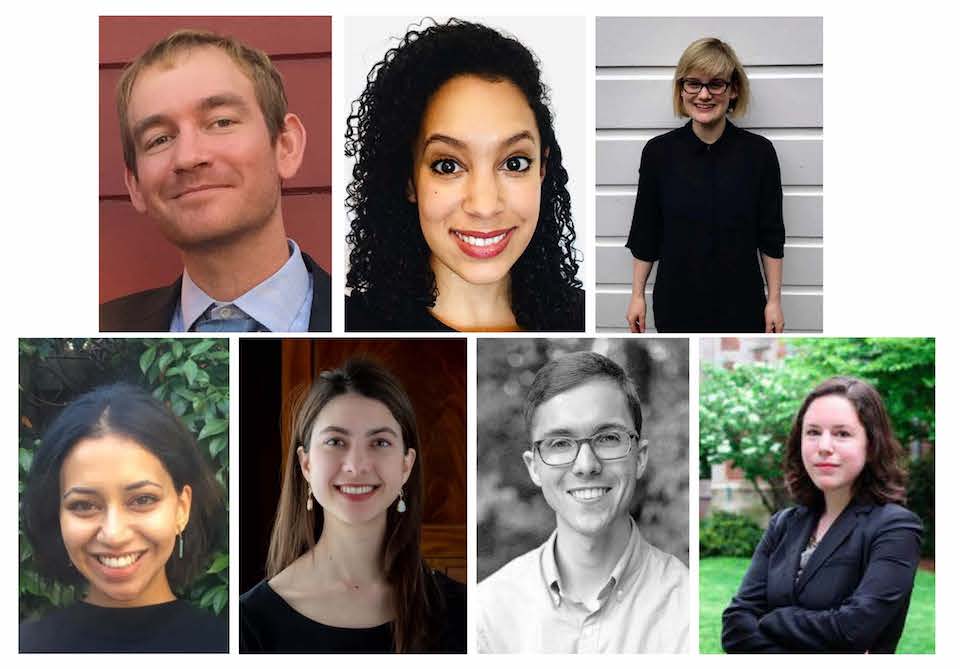 The Bernstein and Robina fellows enable recent graduates of Yale Law School to devote a year to full-time work in the human rights field.

Taylor Burgess (LL.M 2019) is spending her fellowship year at the British Pregnancy Advisory Service in London, where she will focus on Long-Acting Reversible Contraception (LARC) delivery programs in the United Kingdom. She will report on women’s experiences of the expanding LARC programs and scrutinize LARC delivery against the United Kingdom’s commitment to the right to respect for private and family life in the European Convention of Human Rights and the protections in the Convention on the Elimination of All Forms of Discrimination Against Women. Overall, she aims to use human rights principles to push the United Kingdom to maximize LARC’s potential to empower women and guard against the risks of exploitation. At Yale, Taylor was a member of the Allard K. Lowenstein International Human Rights Clinic and worked with the HAVEN Medical-Legal Partnership. Prior to Yale, Taylor worked as an Assistant Crown Counsel in the New Zealand Crown Law Office and as a clerk to the President of the New Zealand Court of Appeal. Taylor holds a Bachelor of Laws (Honours) and Bachelor of Arts in Philosophy from the University of Auckland.

Britta Redwood (J.D. 2017) will be spending her fellowship year at the European Center for Constitutional and Human Rights, an independent nonprofit legal organization dedicated to enforcing civil and human rights around the world. Britta will be based in Berlin, working within the Organization’s International Crimes and Accountability Program and focusing on litigation against Syrian government officials accused of committing war crimes and crimes against humanity. Britta currently works at Cleary Gottlieb Steen & Hamilton LLP, a global law firm headquartered in New York. During her time at Yale Law School, Britta was Editor-in-Chief of the Yale Journal of International Law and a member of the Allard K. Lowenstein International Human Rights Clinic. She holds an A.B. in Philosophy from Princeton University.

Andrew Udelsman (J.D. 2017) will be a Bernstein Fellow with the Texas Civil Rights Project in Alamo, Texas. His work will focus on combating the Trump administration’s “zero-tolerance” policy, which calls for criminal prosecution of all individuals caught illegally crossing the Southwest border, including immigrants with valid asylum claims. He hopes to challenge the “zero-tolerance” itself as well as the en masse procedures in place to enforce it. At Yale, Andrew was a member of the Allard K. Lowenstein International Human Rights Clinic and a student director of the Media Freedom and Information Access Clinic. Following graduation, he clerked at the Supreme Court of Nevada and the United States District Court of Guam. He holds a B.A. in Sociology from Yale.

Sebastian Bates (LL.M. 2019) will spend his Robina fellowship year at the European Court of Human Rights in Strasbourg, France, working with the judges of the Court as well as its Research Division. He will join the Court after undertaking a summer fellowship at the Jerome N. Frank Legal Services Organization. During his year as an LL.M. candidate at Yale, he specialized in comparative constitutional law and public international law and was awarded a Salzburg Cutler Fellowship in the latter field. He was an Executive Editor of the Yale Journal of International Law and volunteered for the Temporary Restraining Order Project. Before coming to Yale, he clerked for Justice Johan Froneman at the Constitutional Court of South Africa and was a research assistant at Pembroke College, Oxford, where he worked on the Quill Project. He completed his undergraduate legal education at Keble College, Oxford, from which he graduated with first-class honors and the Faculty of Law’s All Souls Prize for Public International Law. As an undergraduate, he was involved in Oxford Transitional Justice Research and competed in the Philip C. Jessup International Law Moot Court Competition; he also interned at Columbia Law School’s Human Rights Institute, the U.S. District Court for the Southern District of New York, and the Trial Chamber of the Extraordinary Chambers in the Courts of Cambodia.

Nikila Kaushik (LL.M. 2019) plans to spend her fellowship year working in international criminal justice. Nikila is an Australian lawyer, and before starting her graduate studies she worked as a Federal Prosecutor, as the Associate to a Judge of the Federal Court of Australia, and as a lawyer at the Commonwealth Attorney-General’s Department. At Yale, Nikila was a member of the Allard K. Lowenstein Human Rights Clinic and was on the Board of the Yale Journal of International Law. She holds a combined Bachelor of Arts/Laws (Honours I) from the University of Sydney.

Mara Redlich Revkin (J.D. 2016) is spending her fellowship at the International Organization for Migration (IOM)’s Iraq Mission. Her research as a political scientist aims to contribute to the development of evidence-based policies and programs that can promote the protection of human rights and rule of law in war-torn societies. As a Robina Fellow, she is partnering with IOM and Yale Law School’s Center for Global Legal Challenges to study the effects of a community policing program that IOM is implementing with the cooperation of Iraq’s Interior Ministry. This multi-method study, which includes field experiments in 13 Iraqi villages, door-to-door household surveys, and qualitative observations of policing activities during 18 months of fieldwork in Iraq, will assess whether community policing methods have positive effects on the protection of human rights and other outcomes associated with democratization and peacebuilding. At Yale, Mara was a member of the Allard K. Lowenstein International Human Rights Clinic and a summer intern at the Cairo office of Human Rights Watch. She also served as the lead researcher on Iraq and Syria for two projects implemented by United Nations University, the research wing of the UN system, on (1) the recruitment of children by armed groups and (2) prospects for post-conflict transitional justice and accountability after the Islamic State’s loss of territory in Iraq. She will receive her Ph.D. in Political Science from Yale in May 2019 and holds a B.A. in Political Science and Arabic from Swarthmore College.

Mariana Olaizola Rosenblat (J.D. 2019) will spend her fellowship year working at the U.N. High Commissioner for Refugees (UNHCR) Regional Office in Buenos Aires. As a Protection Associate, Mariana will carry out field research in five countries of South America to assess local reception and integration conditions for arriving asylum seekers. Building on those findings, she will develop and promote policies to improve refugees’ access to welfare and employment schemes as a way to facilitate their local integration. At YLS, Mariana served as a Legal Director of the International Refugee Assistance Project (IRAP), Schell Center Student Director and member of the Allard K. Lowenstein International Human Rights Clinic. Between 2014 and 2016, she lived and worked in Myanmar, where she conducted research in regions marred by ethnic conflict, internal displacement and statelessness. As a native of Venezuela, Mariana is grateful for the opportunity to launch her legal career in her home continent by working to safeguard the human rights of those fleeing violence and humanitarian crises.