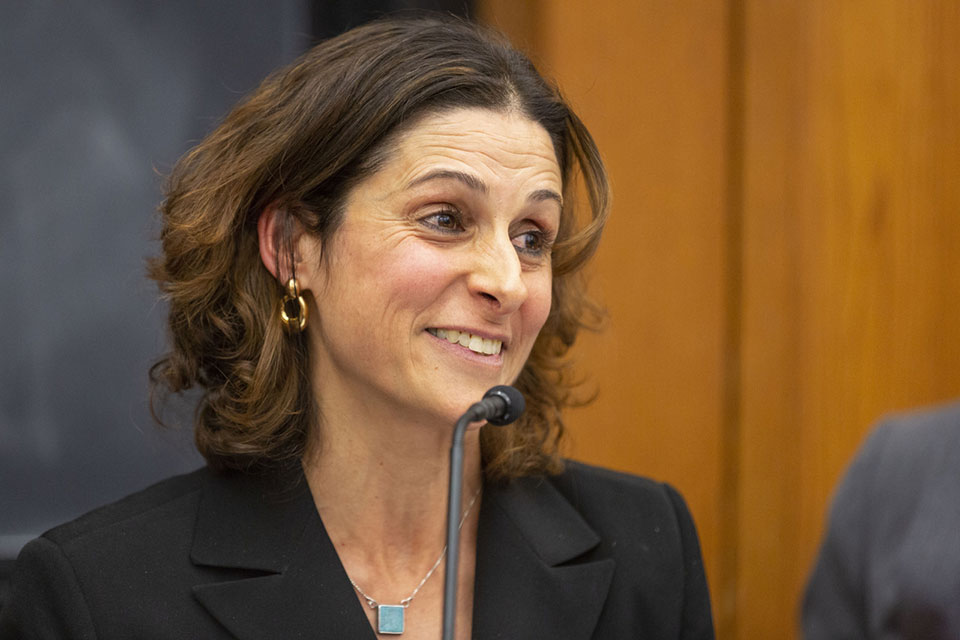 Sari Bashi ’03 is the Robina Foundation Visiting Human Rights Fellow at Yale Law School. She has worked in the movement for justice in Israel-Palestine both at Gisha, an Israeli human rights organization that she founded as a Bernstein Human Rights Fellow in 2005, and at Human Rights Watch. In the excerpted interview below, she discusses the research she is pursuing at the Schell Center this year.

Q: Tell us about your current research — what are you focusing on, and how did you come to this focus?

SB: My concern about the state of the movement for justice in Israel-Palestine motivates my research. There are wonderful people struggling for justice in Israel-Palestine, but we’re a bit fragmented, and I think that’s inhibiting our effectiveness. And because we’re at a point where I don’t think we’re going to see any breakthroughs anytime soon, it’s a good time to build up the movement, so that we can be more effective in the future.

One thing that divides us is the way that we activists for justice in Israel-Palestine engage Israelis as the dominant group. People disagree over substantive questions about whether justice and equal rights can be achieved in Israel-Palestine by having a Jewish state and a Palestinian state, or within the framework of one state. But people also share a lot of common goals, and I think we could work together more effectively if we could communicate with and about Israelis in a different way. Especially for Israeli human rights groups, for example, it can be hard to partner with groups who don’t talk about the role for Israelis in a just future. More broadly, talking about a just vision that includes Israelis as rights-bearers can help win the moral high ground in terms of international solidarity and support, which is going to be really important. And ultimately, it can reduce the perceived cost of giving up on power for Israelis as the dominant group.

In my research, I’m comparing the movement in Israel-Palestine to freedom movements in South Africa. I spent two years in South Africa recently and I was very moved to learn about the way that the African National Congress and its partners managed to pull together a movement that did eventually topple apartheid. The movement was a dysfunctional, badly flawed, and beautiful; their victory was painfully partial, but it was a victory. One thing that was very moving about the ANC is that even in the darkest days of apartheid, when their members were being horribly tortured, brutalized, and oppressed, they said that when all this is over, our vision is not one of revenge — our vision is one in which we live as equals. And I think that over the course of decades, that vision persuaded the white Afrikaner minority to lessen its resistance to giving up on power. It didn’t end apartheid, but it was a factor in speeding up the end.

Q: Does the dialogue surrounding Israel-Palestine in the United States accurately reflect the situation there? What do Americans have to learn about the conflict?

SB: In some ways, the dialogue about Israel-Palestine within the U.S. is more limited than it is in Israel and Palestine. Often there’s a lack of knowledge in the U.S., but when you provide information it doesn’t necessarily change people’s perspectives, because a lot of people are already committed to a certain position on the conflict and political future of Israel and Palestine.

In certain communities, like the American Jewish community and the American evangelical Christian community, there are institutions taking a very particular position to support the right-wing Israeli government. And you certainly have some individuals within those communities who agree, but increasingly you have others, especially young people, who feel very committed to their religious convictions of justice — whether it’s evangelical Christian or Jewish — but who don’t feel like their institutions are representing their view of Israel-Palestine. Progressive people are starting to look at Israel-Palestine as a case of injustice.

Q: What do you think, if anything, individuals can do to contribute to achieving a more just society in Israel-Palestine?

SB: American citizens can do a lot in terms of trying to influence their own government’s policies, which are incredibly influential in terms of what happens in Israel-Palestine. American military backing to Israel is very significant in terms of Israel’s military might, which is ultimately maintaining the occupation. With international institutional mechanisms like the U.N. and the International Criminal Court, I think the U.S. is playing a very unhelpful role in enabling Israel to carry out policies that in many cases violate human rights and international humanitarian law, and in some cases are also war crimes. The mechanisms of oppression that Palestinians face under occupation would be significantly weakened if the American government changed its policies and stopped backing war crimes and rights violations. There’s a lot of bipartisan support within the United States for right-wing Israeli policies, but that is starting to break apart. People should inform their congresspeople and senators that they don’t support policies in Israel-Palestine that violate human rights and that they think that the United States should ensure that American money and political strength are not backing what is essentially a system of oppression in Gaza and the West Bank.

Q: How has your past work with Gisha and Human Rights Watch informed your research, and vice versa? How do your approaches to each differ?

SB: The impetus for my research was a sense that the all the important and wonderful work that I’ve been privileged to do with organizations like Gisha and Human Rights Watch could be more effective if it were part of a better-functioning movement. It’s motivated by questions of how we can all work together for a just future for Israelis and Palestinians.

At Human Rights Watch and Gisha, we were trying to end human rights violations. Gisha promotes the right to freedom of movement by providing direct legal assistance to Palestinians in Gaza who need permits from the Israeli military in order to travel — to reunite with family members, to access education, and to access professional opportunities. We also did broader advocacy to change Israeli policies that restrict the right to freedom of movement by directly lobbying Israeli politicians, trying to win the support of Israeli public opinion, and trying to influence international diplomatic policy toward Israel-Palestine.

At Human Rights Watch my work was more internationally focused. While certainly the Israeli public was still an audience, maybe a more important audience were international actors, whether it was the International Criminal Court or public opinion internationally. I did a lot of work with business and human rights, including with global corporations that were doing business in Israeli settlements in the West Bank in ways that violated human rights. What I’m doing now is taking some time to think through how that very busy, very satisfying work that I did and that others are doing can coalesce into a better-functioning movement.

Q: What role does the human rights movement have to play in achieving justice in Israel-Palestine?

SB: In Israel-Palestine, we’ve always had a lack of balance. In the ’90s, there was a political peace process that basically paid no attention to human rights and, in many cases, worsened the situation on the ground. Now, if you fast-forward to 2018, we have a human rights movement without a political process. So that means that we can help people on the ground and alert politicians to policies that are violating human rights, but without any political support, we can’t make big, overwhelming changes. And that’s part of the reason why I’m concerned with how we can better function as a movement. A successful movement would include not just civil society groups, but also politicians and trade unions and business people — anyone who will support ending an oppressive military occupation that has been perpetuated for more than a half-century.

Q: What has your experience at the Schell Center been like so far?

SB: After spending so much time in the rat race, it is a phenomenal luxury to be able to stop for a minute to read and write and interview people and think. There’s such a wonderful sense of support from colleagues here and such wonderful resources from scholars in not just in the law school but also in the Political Science and Sociology departments — people who have real expertise that are generously agreeing to talk to me about this research. I could not be happier, and I could not be more appreciative of the commitment of the Schell Center to actively engage practitioners. I know that we benefit from the time to sit and reflect, and my hope is that the Schell Center will also benefit from the experiences of people who are doing work on the ground.