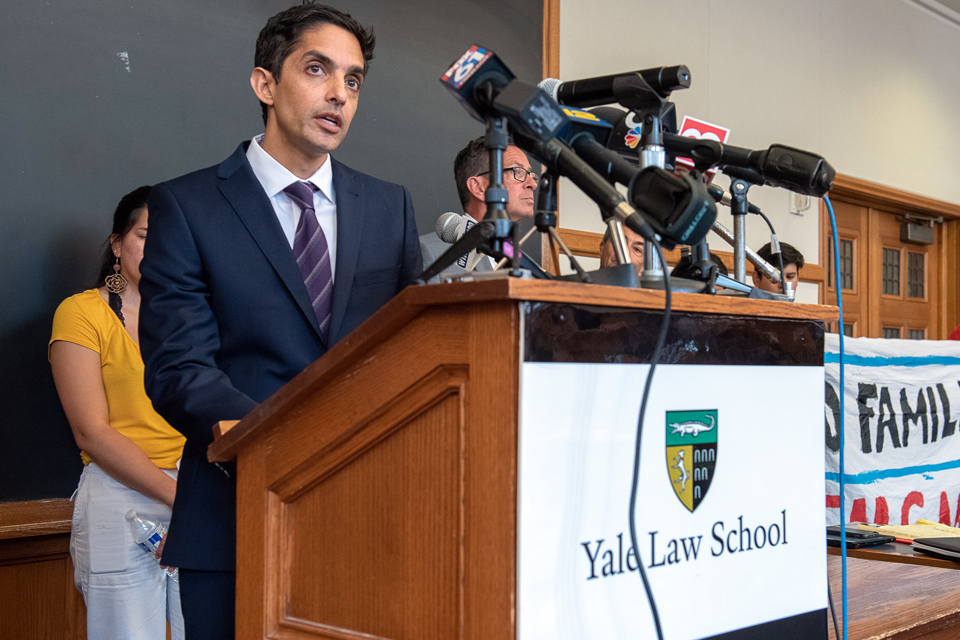 When students and faculty from WIRAC realized two children had been separated from their parents at the southern border and shipped thousands of miles away to Connecticut, they immediately jumped into action. Just as they had done when pushing back against the initial travel ban and termination of DACA, the team mobilized, working relentlessly to seek justice for their clients. In a matter of days, the clinic’s unique legal challenge secured a successful ruling from a judge, quickly reuniting the children with their families. This is the story of how the case unfolded.

It was an ordinary Sunday afternoon when students from the Worker & Immigrant Rights Advocacy Clinic (WIRAC) received an urgent email seeking volunteers to help with an emergency lawsuit on behalf of two children who were separated from their parents at the Southern border.

Spread out across the country, WIRAC students in New York, New Haven, Los Angeles, and Hawaii volunteered to assist in an overnight effort to write and file two complaints and petitions for habeas corpus, demanding immediate reunification, freedom, and rehabilitative treatment for these children and their families.

The children, a 9-year-old boy and a 14-year-old girl, fled violence and persecution in their home countries only to face the terror of being separated from their parents by the U.S. government.

The 9-year-old boy, J.S.R., fled Honduras with his father. After being detained while trying to seek asylum, immigration agents took the boy’s father away while J.S.R. was sleeping and deceived the child about his father’s whereabouts, according to the lawsuit. Immigration officials then placed J.S.R. in a cage for approximately four days, the lawsuit said, only allowing him to speak to his father once.

V.F.B., the 14-year-old girl, came to the United States with her mother seeking refuge from persecution in El Salvador after her stepfather was murdered. While V.F.B. and her mother were detained at a Texas facility, immigration officials told the child she was being taken to bathe, according to the lawsuit. When she returned, her mother was gone, and immigration authorities pretended not to know where she was. She too was only allowed to speak once with her mother during their separation prior to the filing of the lawsuit.

Professors Muneer Ahmad, Marisol Orihuela ’08, and Michael Wishnie ’93 had learned that the children were transported to Connecticut and were being represented by Connecticut Legal Services (CLS). After hearing more details about the trauma they endured following an examination by Yale child psychiatrist Dr. Andrés Martin, everyone in the clinic knew just how high the stakes were. They joined forced with CLS and got right to work, seeking immediate reunification.

READ ABOUT THE LAWSUIT BEING FILED

“We knew we could not go about business as usual while these children suffered irreparable harm,” said Hannah Schoen ’19. “I cannot imagine what it’s like to be a child fleeing horrific persecution and violence, getting detained, and then having the person you love and trust most in the world ripped from you for months. Separating children from their parents is not just unconstitutional—it’s evil.”

Working through the night of July 1, 2018, the WIRAC team and CLS filed two complaints within 24 hours in federal district court in Connecticut.

By the afternoon of Monday, July 2, 2018, U.S. District Court Judge Victor Bolden had granted an emergency telephonic status conference for the following day. He then granted an expedited schedule, directing the parties to file motions for temporary restraining orders or preliminary injunctions by Thursday of that same week.

The WIRAC team and co-counsel spent the next 48 hours working around the clock to prepare four briefs, two for each child, to compel the government to bring the parents to Connecticut and to reunite their clients with their parents outside of detention. At the same time, the clinic reached out to community allies, including WIRAC clients Unidad Latina en Acción (ULA) and the Connecticut Immigrant Rights Alliance (CIRA), as well as elected officials, to alert them to the pending litigation and join with them in a collective effort to free the children and their parents. A major press conference was held at Yale Law School on July 6, 2018. Elected officials including U.S. Senator Richard Blumenthal ’73, Congresswoman Rosa DeLauro, State Senate President Pro Tempore Martin Looney, and Governor Dannel Malloy attended, along with advocates and dozens of media outlets.

“For clinic emergencies, we usually run to the same Yale Law basement room so we can work as quickly as possible, but with summer internships that ideal set-up was impossible,” explained Carolyn O’Connor ’19, who was in a remote location in Hawaii at the time. “We had to work out an entirely new system literally overnight.”

Between students and faculty on trips and vacations in the middle of July, the team stretched across continents and four time zones, which they decided to use to their advantage, finding a way to create 36-hour workdays to furiously work on the motions under an extremely tight deadline.

“The East Coast team would start the work, then all of us would join as it became morning in our time zone,” said O’Connor. “Then, by the time I sent our final drafts at midnight, supervisors were awake in either Europe or the East Coast and ready to provide edits. When I woke up next, six hours of work had already been done. Every day matters when children are hurt, so we made every hour count. “

Reena Parikh, WIRAC Cover Fellow, had just started her first day at the Law School when the emergency lawsuit was filed.

“I was fortunate enough to jump right in and assist the collective efforts as needed,” said Parikh. “From day one, I was incredibly impressed with WIRAC’s efforts to mobilize and meaningfully engage community groups, other legal organizations, and elected officials to accomplish this result so quickly and in the right way. I was immediately blown away by the unrelenting dedication and commitment of the clinic students and interns to this case.”

After several days of intense hard work, the motions were filed and a hearing was set. Then on July 13, 2018, Judge Bolden ruled that the government’s conduct caused the children trauma, in violation of their due process rights, and ordered the government to act immediately to address the trauma it has caused the children. It was the first ruling to hold that the government’s systematic dissolution of immigrant families violates children’s constitutional rights. Three days later, the government transferred the parents from Texas to Connecticut, granted them parole, and reunited them with their respective children, and released all of them from detention.

READ ABOUT THE FAMILIES BEING REUNITED

While there are still thousands of children separated from their families, the quick action and compassion of the lawyers working on these two cases demonstrated a powerful model that others can follow going forward.

“Lawyers stood up in court. A judge issued rulings. Activists rallied outside the courthouse,” said Professor Muneer Ahmad. “Our elected officials spoke out on behalf of the most vulnerable among us. The local U.S. Attorney’s Office did the right thing. But in the end, we all were simply, but powerfully, giving voice to the verses of justice already written in our hearts — kids belong with their parents. People fleeing persecution deserve protection. Children should not be held in cages. Families belong together.”

“The success of our cases was spurred by the relentless energy of our partners in the community who organized, protested, demanded accountability from the state and showed up to support our clients and their parents,” added Aseem Mehta ’20, who also worked on the case.

The successful outcome of the case is one of many significant feats accomplished by Yale Law clinics, which in the past two years, have secured three nationwide injunctions working to uphold the rule of law and fight for underserved populations without a voice.

“We are incredibly proud of our students and faculty, whose work has been nothing short of inspiring,” said Dean Heather K. Gerken. “This case is yet another example of the unparalleled clinical experience at Yale that puts students on the front lines of the biggest cases in the country."

For the students — who have a once in a lifetime opportunity to be at the forefront of cases with a national scope and impact — working on this case was something that will stick with them as they develop their legal careers further.

“I joined WIRAC because I believe that the clinic uses law to make justice a reality,” said O’Connor. “I feel overwhelmingly grateful to be part of a team that has the values and vision to achieve the justice due to these children and their families who have already suffered so much.”

In addition to those mentioned in the story, this work was made possible by WIRAC summer interns Rebecca Brown, Trini Gao, and Brian Trinh; and law graduate Amit Jain, ’18. In addition, WIRAC received advice and assistance from Dorothy Tegeler ’16 and Liz Willis ’17, of the Asylum Seeker Advocacy Project, and Efren Olivares ’08 at the Texas Civil Rights Project.

Dr. Andrés Martin, Professor of Child Psychiatry at the Child Study Center at Yale Medical School, and his team of child psychiatrists were critical in providing key expert opinions.