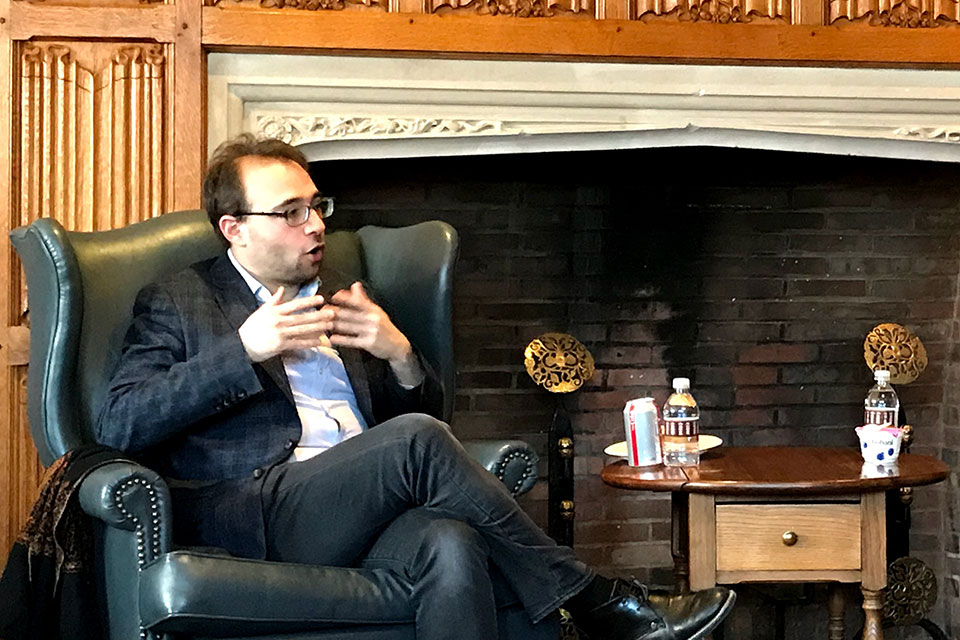 Yascha Mounk discussed the global rise of populism and the threats it poses to democracy at the Human Rights Workshop on January 31, 2019.

At the Human Rights Workshop on January 31, 2019, Yascha Mounk, an Associate Professor at Johns Hopkins University, discussed the global rise of populism and the threats it poses to democracy. His talk drew on his recent book, The People vs. Democracy: Why Our Freedom Is in Danger and How to Save It.

“It is arguable that the four most populous democracies in the world — India, the U.S., Indonesia, and Brazil — are ruled by populists,” he said. He explained that in the case of the U.S., he feels divided about how to evaluate the effects of populism. “Sometimes I think that what’s happening in the U.S. is the first couple steps towards Hungary,” he said, describing Hungary as a dictatorship. But at other moments, he explained, he believes that the U.S.’s comparative affluence, deeper democratic history, and strong independent institutions will check the influence of what he calls President Trump’s populism.

According to Mounk, populist leaders and parties as dissimilar as Donald Trump, Hugo Chávez, Viktor Orbán, and Podemos (the Spanish Socialist Workers’ Party) legitimize themselves by maintaining that they alone represent the people and use this argument to undermine their critics, such as the free press or political opponents.

Mounk helped create a unique global database on populism, with which he and his team have studied leaders and regimes since 1990. They found that populist governments did lasting damage to democracy by limiting civil liberties, delegitimizing institutions, exacerbating corruption, and more. However, Mounk was adamant that his findings did more than just “confirm the need to be worried.” They also, he said, “provided an antidote to fatalism,” because his team studied several countries that resisted populist takeovers. Mounk argued that the U.S. has the tools necessary for such resistance, including a vibrant civil society and historic, independent courts and other institutions.

Mounk described populism as “a move from a liberal to an illiberal democracy.” He elaborated, “We tend to assume that democracy and liberalism go together automatically. We can have both, but we can also be pushed to ignore one or the other” by choosing individual rights over liberal values or vice versa. Mounk gave an example in which liberal values were in tension with the democratic aim of translating the preferences of the majority into law: the 2009 referendum in Switzerland that approved a constitutional amendment banning the construction of minarets in the country, even though the Swiss constitution protects freedom of religion and conscience. “That referendum was criticized as being undemocratic,” said Mounk, “but that’s a confusion of terms: it was deeply illiberal, but it was not undemocratic.”

When asked whether democracy and liberalism were fundamentally in tension, Mounk responded, “I genuinely want to live in a system in which we have both democratic and liberal values. There’s a huge normative cost for deviating from one or the other.”

In his book, Mounk offers many concrete recommendations for averting or ending populist takeovers. In the Workshop, he stressed several of these, including recognizing global rage at technocratic elites, supporting resistance against corruption and the suppression of rights in populist societies, reinvesting in democratic institutions, and making sure those institutions are staffed by people who are committed to preserving both liberal and democratic values. But he was more circumspect about the efficacy of other approaches to staving off populism. For instance, his study found that while economically unequal societies are more vulnerable to populism, this is not true everywhere: in France, economic inequality has not grown in the last 20 years, but that has not stopped the rise of Marine Le Pen and the National Front or other populist movements. Turning toward the future of the U.S., Mounk therefore suggested that while lessening economic inequality would seem to be an obvious “economic policy route to making the U.S. less populist, it’s not clear to me that that would restore faith in the U.S. political system.”

The Human Rights Workshop at Yale Law School is sponsored by the The Orville H. Schell, Jr. Center for International Human Rights. The Center coordinates a diverse program of human rights activities that serve students and scholars at Yale and contribute to the development of the human rights community locally and internationally.