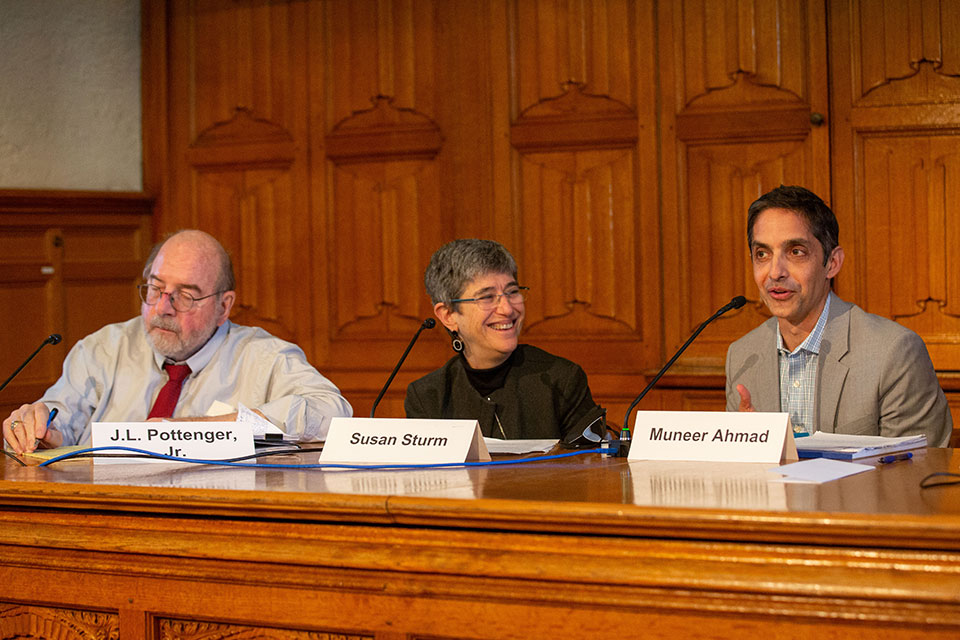 Looking around the room at a celebration of clinical education at Yale Law School recently, Professor Muneer Ahmad had reason to be optimistic.

Ahmad, the Deputy Dean for Experiential Education and Sol Goldman Clinical Professor of Law, had the opportunity to stand up in federal court earlier in the week for the first time in more than two years. He was introducing his student before she went on to argue on behalf of their client “with the clarity and sophistication of an advocate many years her senior.”

“It was my first time in a physical courtroom since the pandemic began, the first time in over two years since I have invoked Jerome Frank’s name when introducing a clinic student,” said Ahmad, who co-directs the Worker and Immigrant Rights Advocacy Clinic. “My colleagues and my predecessors have been doing that for 50 years.”

On April 7, faculty, students, and alumni involved in the clinical program through the years gathered to celebrate the 50th anniversary of clinical education and the Jerome N. Frank Legal Services Organization at Yale Law School. The event coincided with the 25th Annual Liman Public Interest Colloquium, which this year reflected on the past and future of public interest lawyering. Panels examined the role of clinical education in shaping generations of public interest lawyers. One panel on why clinics matter, for example, asked how clinical education changes the law school experience as well as students’ expectations of practicing law.

READ ABOUT LIMAN AT 25 YEARS

“Gathering with so many of our alumni across the generations was a deeply moving experience,” said Professor Fiona Doherty, the Director of the Jerome N. Frank Legal Services Organization and Clinical Professor of Law. “Person after person described the clinics as their home away from home during law school: the place where they first experienced the sense of purpose and dedication that comes with fighting for a client’s rights.”

The event was a chance to reflect on the history of the clinics and the astonishing breadth of work that has been accomplished in the five decades since its establishment, which began when Yale Law School introduced a fieldwork seminar during the 1970-1971 academic year. The seminar was the first for which Yale Law School students received academic credit for legal work outside of the classroom. But, as told in a 1999 history by Laura G. Holland ’00,  the Law School’s clinical program has much deeper roots.

Legal aid work by students became more formalized in 1964 when Frank Dineen ’61 — “essentially the first clinical professor for Yale Law students,” according to Holland — became the full-time Director of New Haven’s Legal Aid Bureau, the forerunner of today’s New Haven Legal Assistance Association. Dineen, who had no official affiliation with the Law School until becoming a Visiting Clinical Lecturer in 1990, held evening classes at the bureau. Though students received no credit for these classes, they learned practical matters including how to file pleadings and who sheriffs were.

Clinical education took another step forward in 1969 with the arrival of the first clinical faculty, Dennis E. Curtis ’66 (now Clinical Professor Emeritus), Stephen Wizner (now William O. Douglas Clinical Professor Emeritus), and the late Daniel Freed ’51 (Professor Emeritus). They supervised students working with indigent clients at the Federal Correctional Facility in Danbury, Connecticut, as well as what is now Connecticut Valley Hospital. The clinical program grew from there, adding faculty from a range of backgrounds to help equip future graduates for careers in a variety of career paths.

“This was the prototype of LSO, and of clinics at YLS,” Ahmad said. “It was student-driven and justice-oriented, and it began a pedagogical transformation of legal education.”

Today, as an academic entity of the Law School, the LSO operates nine clinics which continue to focus on New Haven and communities in Connecticut, while also working regionally and nationally. In addition, the Law School features dozens of other clinics outside of LSO to provide students with a broad range of innovative, hands-on experiences that impact communities around the country and all over the world. Over the years, the clinics have expanded in scope, becoming more diverse in their offerings, Ahmad noted. LSO clinics represent people and organizations in the areas of criminal defense and criminal justice, incarceration, housing, immigration, labor, veterans’ legal services, and community and economic development. The Allard K. Lowenstein International Human Rights Clinic expanded Yale Law offerings into international human rights, and in recent years, faculty, including many nonclinical faculty, have created an array of new clinics, spanning media freedom and information access, environmental protection, entrepreneurship and innovation, global health, affirmative litigation, capital punishment, free exercise, and private law. Presently, more than 90 percent of students engage with clinics during their time at Yale, and unlike nearly all other schools, Yale Law students can participate in a clinic in their first year.

“Clinics today are a critical locus of teaching, learning, service, and scholarship,” said Ahmad. “Students, faculty, and ideas move freely between the clinical and nonclinical parts of the law school.”

Ahmad added that, for all the variety in subject matter, the Law School shares certain pedagogical commitments regarding the clinics.

“Our students are always out in front,” he said. “Faculty provide intensive supervision. We value peer learning. We inculcate the highest values of the profession. We confound the conventional divisions between doctrine, theory, and practice. We pursue litigation as well as many other forms of legal advocacy. And we privilege service to and work alongside poor and marginalized individuals and communities.”

Doherty agreed, noting that “through it all we strive to honor the founding spirit of LSO.”

“We know that the devotion to our clients and overall commitment to excellence are the best tributes we can pay to those who developed and nurtured the Law School’s clinical program over these last 50 years,” Doherty said.