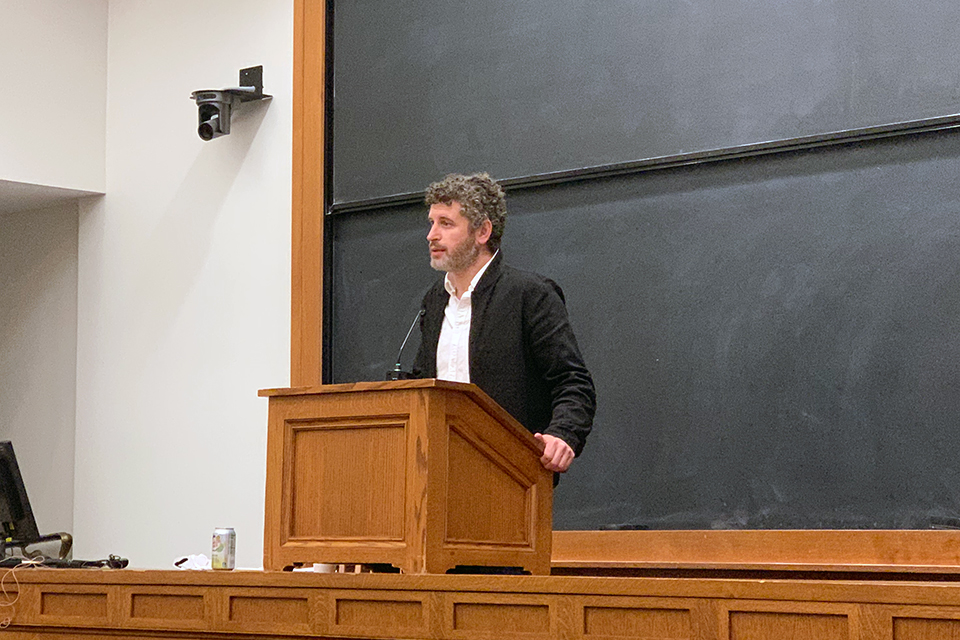 On April 7, Michael Breen ’11 joined the Schell Center for International Human Rights to lead the Human Rights Workshop. Breen, the President and Chief Executive Officer of Human Rights First, spoke about his organization’s evolving strategy since 2018.

“We started to think about the landscape and what was missing,” he said.

“We are living in a time of a global struggle for justice,” Breen said. “We want to be an organization that is integrated in our communities and around the world, grounded in both domestic and international work. We’re trying to be a leader in the human rights movement and it’s important to ask what capabilities we need to do so.”

For example, Breen, a veteran, began asking veterans with intelligence experience to use their skills for human rights investigations. Some veterans documented the impact of the Migrant Protection Protocols, a policy in which migrants arriving in the U.S. are forced to remain in Mexico during their immigration proceedings. These veterans also testified in Congress about the human rights violations they witnessed at the U.S.-Mexico border. Through the experience, Breen said, they discovered both important evidence and their own power to contribute to justice.

In 2020, Breen said, Human Rights First only had two IT staffers, who were helping build machine learning technology for the human rights movement to detect early online signs of violence. Human Rights First deployed this system in the Philippines to combat extrajudicial killings under President Rodrigo Duterte’s regime. They used another system to track and catalog police use of force in the U.S. as soon as it took place, a program that Human Rights First’s tech team has been expanding since.

Breen sees Human Rights First’s technological advances as part of a broader aim to diversify the movement’s tools for change.

“Are we prepared as a movement to go beyond calling Congress to get what we want? I think the answer has to be yes,” Breen said.

For Breen, the Taliban’s takeover of Afghanistan exemplifies the need for new approaches to urgent human rights crises. When the Biden administration announced the military’s withdrawal from Afghanistan in April 2021, Breen said, Human Rights First began by producing a detailed strategy plan for how the Biden administration could safely withdraw. Concerned about the dangers of a poorly planned exit, Human Rights First lobbied members of Congress and protested outside of the White House to urge the administration to follow their plan, Breen said, “but, needless to say, they didn’t do it.”

When the Taliban’s attack on Kabul began, Human Rights First’s strategy pivoted. The organization built a database and invited people to send data, which was used to plan an airlift that allowed many to flee the country. Breen later learned that the U.S. State Department was also using Human Rights First’s database.

“It was a critical need that just got filled without asking,” he said.

Breen’s goal for Human Rights First is strengthening the organization’s capacity to anticipate those kinds of pressing needs in human rights crises and respond to them as quickly as possible.

He argued that human rights advocates are better served by building agility instead of relying on five-year strategic plans to guide them.

However, agility does not mean compromising on long-term commitment to a cause.

“Bouncing from crisis to crisis is not good for human rights. It’s basically malpractice to enter a situation without intention and the true ability to stay,” Breen said. “It is really important to be responsive, but there’s a difference between people’s attention span and the work ... The work is often what happens when no one is paying attention.”