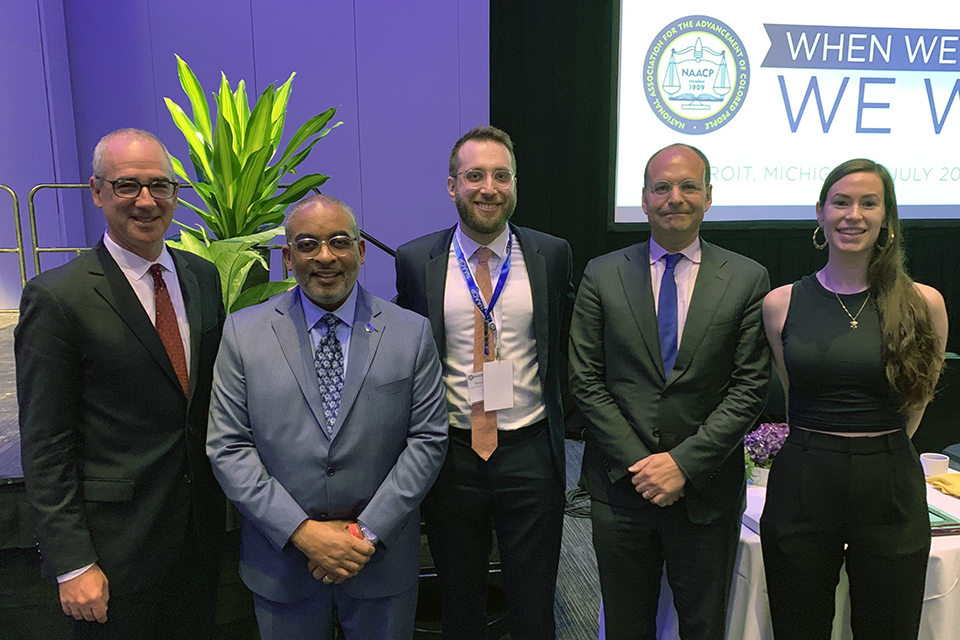 The Peter Gruber Rule of Law Clinic received an award from the NAACP for representing the organization in lawsuits pressing for voting rights, equal representation, and a fair and accurate 2020 census.

Michael J. Wishnie ’93, the William O. Douglas Clinical Professor of Law and Counselor to the Dean, accepted the Foot Soldier in the Sands Award on July 22 on behalf of the clinic at the NAACP national convention in Detroit. Bradford Berry '88, the NAACP’s General Counsel, presented the award at an event at which Stacey Abrams ’99 was the keynote speaker.

Wishnie called working with the NAACP an “extraordinary honor,” noting that students in three graduating classes of Yale Law School have now done so.

“Many clinic students had their first experience of representing a client – from standing up in court, to speaking with a witness or opposing counsel, to emailing a government official – by saying ‘My name is … and I represent the NAACP,’” he said. “They will carry that experience with them always. And of course, representing the NAACP and some of its units also means that these students have had the opportunity to learn from many brave and wise NAACP local and national leaders.”

The award, given annually at the national convention by the NAACP’s legal department, recognizes attorneys, “who have gone above and beyond the call of duty,” on behalf of the organization and its civil rights agenda through pro-bono contributions of legal expertise.

The Gruber Rule of Law Clinic has litigated three lawsuits for the NAACP. Two of these suits are challenging the federal government to conduct an accurate 2020 census, which will determine representation in Congress, state legislatures, and local government. One case concerns the public’s right to know about preparations for the census. The other case challenges what plaintiffs describe as underfunding of the census and methods they say will dramatically undercount African American and other communities of color.

The third suit concerns prison gerrymandering, the practice of counting prisoners as residents of the state legislative districts where they are incarcerated instead of in their home districts. That suit against the state of Connecticut is the first statewide challenge of prison gerrymandering, which Berry described as a “nefarious but widespread practice [that] has the effect of shifting electoral power from racially diverse cities to largely white rural areas.” The suit is ongoing.

“The Peter Gruber Rule of Law Clinic has taken a large laboring oar in prosecuting the case as counsel for the plaintiffs,” said Berry, who has worked closely with the clinic. He noted that all of the clinic’s work with the NAACP was done by just a few instructors, “and a handful of committed law students.”

Also attending the awards presentation were Georgia Travers ’21, a clinic student; Benjamin Alter ’18, a 2018-2019 Liman Fellow now at the NAACP Office of General Counsel and a former clinic student; and Jeremy Creelan ’96, co-counsel with the clinic on the NAACP’s census litigation. Creelan’s firm, Jenner & Block, was also recognized at the event.

The 2019 award came in a year when equal representation and fair elections were major topics at the convention, attended by a projected 10,000 people over five days. Abrams, whose run for governor of Georgia brought increased attention to the issue of voter suppression nationally and has since founded an organization to ensure that underrepresented communities are counted in the state, received the NAACP’s Champion of Justice Award. In her remarks, she challenged NAACP members to fight against voter suppression and for a fair census count in their home districts.