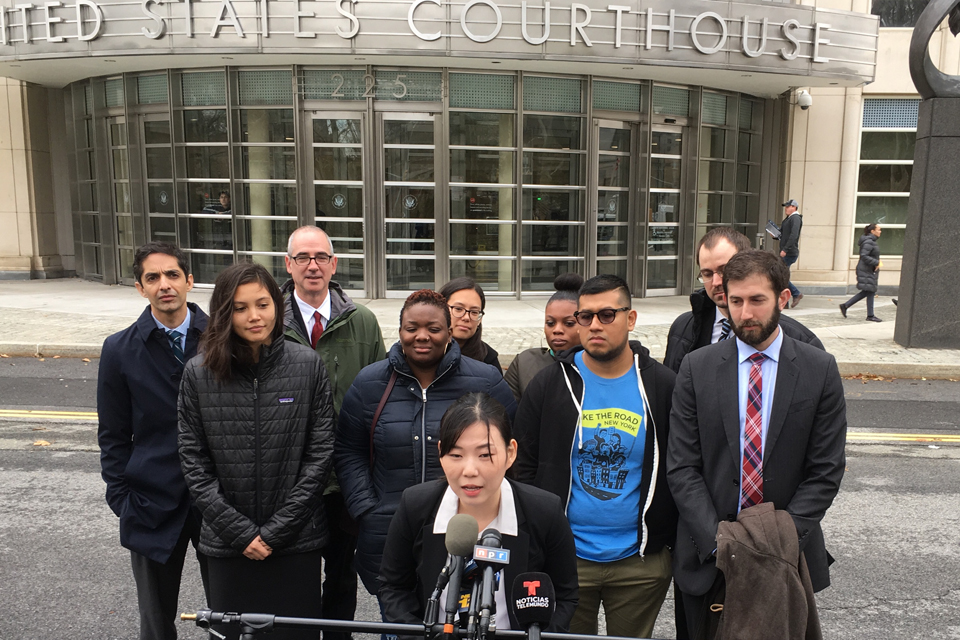 Students in the Worker & Immigrant Rights Advocacy Clinic (WIRAC) returned to federal court on November 16, 2017, to seek relief for nearly 4,000 Deferred Action for Childhood Arrivals (DACA) recipients whose renewal applications were erroneously rejected by the government.

After a hearing in the U.S. District Court for the Eastern District of New York, a judge granted WIRAC’s request to amend their initial complaint to challenge the government over what they deemed an “unjust rejection” of 4,000 applicants and provide relief to all those who are not included under the government’s recent announcement.

Members of the clinic said these 4,000 individuals did everything right to comply with the government’s deadline for application renewals, but now risk losing their entire livelihoods because of President Donald Trump’s decision to abruptly terminate the DACA program.

With a looming March 5, 2018 deadline for terminating DACA, the court also set a schedule for a motion for class certification so that the clinic can seek to bring nationwide relief to all DACA-eligible individuals.

“This problem is a predictable and direct outcome of the government’s abrupt and arbitrary actions,” said Healy Ko ’19, a law student intern for WIRAC. “The government cannot make up excuses for rejecting properly submitted DACA renewal applications.”

In September, WIRAC was the first in the nation to challenge the termination of DACA, in a lawsuit filed on behalf of a young immigrant New Yorker, Batalla Vidal, and the organization Make the Road New York (MRNY). Students and faculty from WIRAC are co-counsel on the case with MRNY and the National Immigration Law Center. The lawsuit argues that President Trump’s actions on DACA violate federal law and the equal protection guarantee of the Constitution.

Plaintiffs learned of the 4,000 DACA recipients with improperly rejected renewal applications through a deposition conducted in the lawsuit. After Plaintiffs alerted the court of the improperly rejected applications, and on the eve of being brought into court—just before midnight—the government changed its prior position and stated they would reconsider applications that were rejected on account of delays by the post office. The clinic maintains that the government’s position is insufficient, however, as it leaves out some members of plaintiff MRNY and potentially thousands of others who did everything right but still had their applications rejected.

“We will keep fighting until we have relief for the 4,000 DACA recipients whose renewal applications were erroneously rejected and for all DACA-eligible individuals throughout the country,” said Emily Villano ’19, another WIRAC student.

Read more about the case here.