Ashley and her fiance, Adriana, met while they were both working for the City of Bridgeport. Now, two and half years later, they are engaged and expecting their first child. Both women always knew that they wanted to be parents, but the process up until this point has been far from easy. 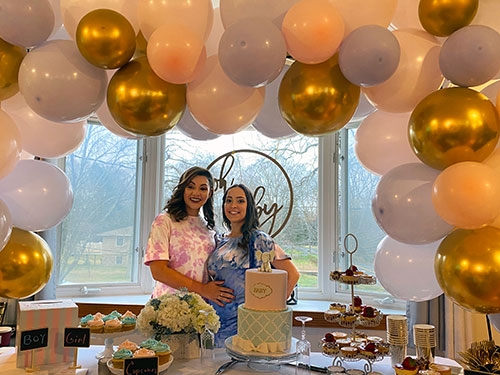 Ashley, who the pair decided would carry their child, suffered a miscarriage with her first pregnancy, right at the time the COVID pandemic first hit. “We’ve been through quite an experience,” Ashley says. “We found out we were pregnant and then the first ultrasound we found out there were issues. Going through that was probably the toughest part. Neither of us ever expected that we would lose our child, There were a lot of questions: ‘Why me? What did I do?’” Ashley’s second pregnancy wasn’t viable, adding to the couple’s stress.

While the couple is now pregnant again and feeling hopeful about the future, underlying their excitement is a nervousness surrounding Adriana’s legal parentage of their child. Despite being Ashley’s partner and co-parent in every sense of the word, Adriana will have no legal connection to their child at birth. Rather, due to Connecticut’s outdated and burdensome parentage laws, Ashley and Adriana will have to go through the months-long process of a second parent adoption to ensure that Adriana is legally secured as their child’s other parent.

For the couple, this is just one more frustrating obstacle they must overcome in their process of building a family, a process that has already been filled with heartbreak. “We just feel like this is another hurdle we have to go through,” Ashley says. “Going to the fertility clinic was nothing but mental and physical strain, so adding something else to the mix just makes things a lot harder.”

The couple first learned about Connecticut’s parentage laws when they initially visited their fertility clinic. When Ashley got pregnant, the pair investigated the law further in anticipation of what would come. While they would love to begin the process immediately, the couple must wait until their child is born to pursue the second parent adoption, which has made this pregnancy all the more nerve-wracking. There will have to be a period in which Adriana’s parentage is legally non-existent, and Ashley is particularly worried about what could happen during the birth of their child. These fears are only compounded by the COVID-19 pandemic which has generated even more instability in the couple’s life.

“Our main concern is before and after we have our child,” Ashley says. “If we’re in the hospital and something happens to me, or, God forbid, something happens to our child, Adriana has no say until she legally adopts. You pray and hope that something doesn’t happen, because if it does, she doesn’t get any say in it. She could lose her fiancée, she could lose her child, she could lose everything and that’s not fair. She’s been a part of building our family this entire time.”

The couple hopes that Connecticut will revise their parentage laws so that all children have security from birth and don’t have to experience this worry and vulnerability. “It would be helpful not just to our family,” Ashley says, “but families before us and families that are going to be after us that Connecticut catches up with the times.”