Four-year-old Hudson loves Legos and 2-year-old Avery loves stuffed animals, but they are inseparable best friends. The two are the lucky children of Juliana and Alicia Messina, who live in Bethel, CT. And there’s a third sibling on the way! 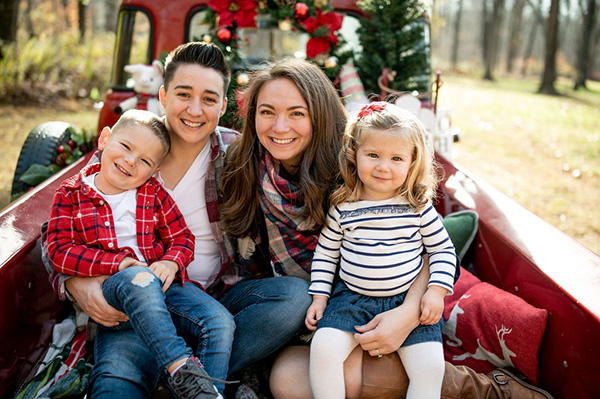 “We wanted to have them close together like that so they could be friends,” says Juliana. “Of course they have the usual sibling stuff about sharing! But when Hudson’s gone to grandma’s for the day, Avery is looking for him all over the house. It’s sweet.”

Juliana and Alicia have known each other for 13 years and have been married for almost six. From the time they were engaged, they knew they wanted to have kids together. Shortly after they married, they started what Juliana calls “a pretty challenging and emotional process” to become parents with the help of a reproductive endocrinologist.

“The information is overwhelming and the decisions you have to make are so consequential,” she says. She and Alicia carefully made a financial plan, worked with their doctor, chose a sperm donor, met with a social worker, and reviewed and signed many legal documents. They also decided on an “open ID” process, which will enable their children at age 18 to contact the donor if they wish.

Where it was possible, they tried to work with LGBTQ-friendly service providers, who wouldn’t, for example call only Juliana, who carried the babies, “mom,” or use gendered paperwork. Crucially, they read up on Connecticut law to reassure themselves that Alicia would be a legal parent from the moment of birth.

Even having to consider a second-parent adoption, which they decided against, was upsetting. “The idea of spending 700 dollars plus just to say the obvious, that Alicia is their parent, is wrong. No one questions anybody else’s marriage. Straight couples don’t have to adopt their own kids. We just want to be recognized like everyone else.” At their LGBTQ-friendly birthing center, Alicia was thankfully immediately put on Hudson’s and Avery’s birth certificates as the non-biological parent.

Both Hudson and Avery had minor breathing problems at birth and were transferred by ambulance from the birthing center to a hospital. “With Hudson, they let Alicia ride in the ambulance with him,” says Juliana. “With Avery, they didn’t.” The couple doesn’t know whether it was discrimination or just a fast-moving situation, but with this third pregnancy, they worry about what may happen if a similar situation occurs.

“We support the Connecticut Parentage Act and anything that makes a family feel more secure and more comfortable regardless of sexual orientation or gender or marital status,” says Juliana.