Parenthood for Stephanie and Denise has brought both tremendous joy and the challenges that many parents face. They try to keep up to date on internet jargon and understand what a “Twitch stream” is so they can support their 14-year-old son’s love of video games. They struggle to convince their headstrong toddler that she can’t wear her Crocs every single day. Like so many in the era of COVID, they are juggling work, school, and healthy play. However, as a same-sex couple, Stephanie and Denise have also faced numerous additional obstacles to securing their children and building their family. 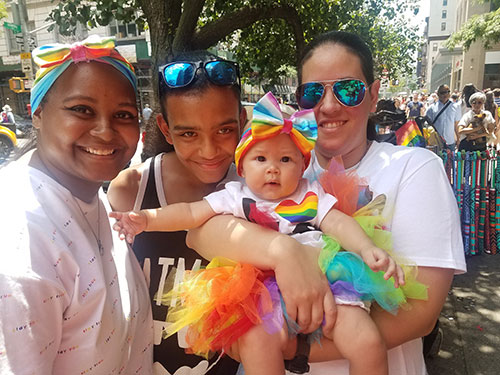 The couple particularly worries about the security of Denise’s relationship with their older child, “J.” Stephanie and Denise started dating in 2010, when J was 3 years old. Over 11 years, Denise has stepped up and parented J in every way. Denise was there for his first day of kindergarten, for tooth fairy visits, for doctors’ appointments, and parent-teacher conferences. They make decisions together about his life and well-being and jointly provide for him financially. Most importantly, J sees Denise as his mom. They share many common interests, including wrestling. Denise has been there for everything; she’s been “his constant” as far back as J can remember. Denise is an equal parent in every way, and Denise’s extended family considers J one of their own. As Stephanie puts it so beautifully, “there is no separation. Everyone is included.”

Despite these strong ties, Denise has no legal relationship with J. If something were to happen to Stephanie, J could be separated from Denise and from his little sister. The thought infuriates and terrifies Stephanie. According to Stephanie, “I won’t ever understand how in the eyes of the law someone who has shown no interest in a child has more say than someone who has been there their entire life. It will never make sense to me. Someone who has voluntarily done everything, out of pure love for the child. Selfless love is what it means to be a parent.”

Currently, their only option to secure J’s relationship with Denise is an adoption, which would be difficult litigation that would require them to terminate the rights of J’s birth father who is not involved in his life. Instead, with the Connecticut Parentage Act, Denise could be secured as an equal, legal de facto parent without having to go through that battle. J would be secured to both of his mothers, and the door would remain open to his birth father.

Connecticut’s current outdated parentage laws have also created challenges for protecting their younger child, “D.” Stephanie and Denise decided that they wanted to have a second child in September 2014, shortly after they were married. They thought the process would be straightforward: they would find a sperm donor, have the donor sign a standard document relinquishing any potential parental rights, and they would be set. However, the couple quickly learned that the process to add to their family would be anything but straightforward. Over the coming months, Stephanie, who the pair decided would be the birth parent, was unable to conceive. “It was a very confusing and emotional time,” Stephanie says. “The worst thing about our situation was the sadness and the relief that you feel when you find out you have fertility issues. You feel sadness because something is wrong, but you also feel relief because something is wrong so therefore insurance will help you.”

At the start of the process, the clinic told Denise that she would need to complete a second-parent adoption in order to be fully secured to D. Already struggling with infertility, this realization was a blow for the couple. “It’s a lot to take in,” Stephanie says, “to try for so long, to find out that you have fertility issues and then to find out that the other parent has to basically pay money to be recognized as the parent. I know that Denise, lots of things roll off her shoulders…and I could tell that that part really hit home for her.”

When Stephanie eventually did become pregnant, the couple planned to pursue second-parent adoption after D was born. However, the pregnancy was very physically challenging for Stephanie, and she had to undergo a C-section. Additionally, right after their child’s birth, Denise was in a car accident that left her with several injuries and the family without a means of transportation. As both mothers healed, they decided to wait on the adoption. “For a long time, we were just focused on Denise’s physical therapy, my physical therapy, my healing,” says Stephanie. After going through such a long process to conceive, the pair wanted to settle in and heal with their new baby.

Having already gone through so many hoops to get pregnant, signed so many papers, and overcome so many obstacles, Stephanie sees the additional hurdle of a second-parent adoption as unfair, insulting, and unequal. But she still worries that something could happen and separate Denise from their children. She worries about the instability that Connecticut’s current parentage laws create in their lives.

More than anything, the couple wants their state to treat their family equally and fairly and to enable them to protect both of their children. They are calling for an update to Connecticut’s parentage laws so that their children are secure and so that Denise and other parents like her can have the respect and the rights that they deserve. “Equality,” says Stephanie, “I think that’s all anyone really wants. I want our family to be seen as just that, as a family.”