Shannon and Megan first met as kids, when Megan moved in across the street. Two years apart in school, the couple did not interact much until high school. After years of friendship, they started dating in college, moving to North Carolina when Shannon was accepted into grad school. The couple have since returned to Connecticut and are happily married, wanting nothing more than to build their family. 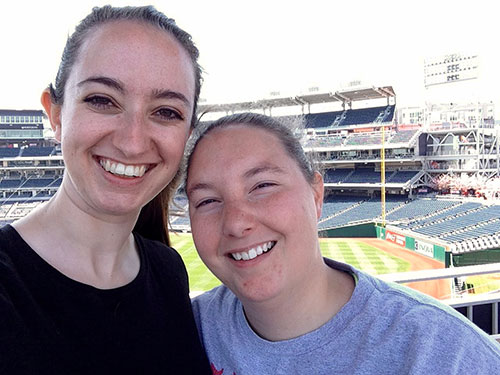 However, the couple have already encountered barriers. Shannon and Megan are now finally in the process of trying to get pregnant, after first advocating with Shannon’s company to provide fair and equal insurance coverage for assisted reproduction. They also know that Connecticut’s outdated parentage laws mean they will have to take on the additional hardship of a second parent adoption in order to fully secure their family. “Heterosexual couples are able to prepare for the arrival of their baby without the burden of a complex legal gauntlet,” says Shannon, who the couple have decided will be the birth parent. “While they’re decorating nurseries, we’re going be speaking with an attorney about how to ensure our child is protected in the event that something happens to me. It’s important for us to verify that Megan will be a legal parent in all ways, shapes and forms.”

Shannon worries about the risks to their family if they do not embark on this process, despite its additional financial costs. “There are so many what ifs,” she says. “The second parent adoption insures that you will be verified as being a parent, which other families don’t need to think about.”

The couple want to focus on the joys of becoming pregnant and save money for their future child. However, Shannon and Megan have to jump through hoops purely because they are in a same-sex marriage, adding extra stress to an already stressful time. The couple has to hire an attorney and keep up-to-date on parentage laws to acquire the same protections afforded to other families. “It’s like running on a track,” Shannon says. “Once we get over this hurdle with the fertility insurance inequality, then we’re going to have to deal with Megan adopting our child. It’s unfair and frustrating.”

The women want only for Connecticut to treat their family like every other family. They hope that the State will recognize that its laws are antiquated and unequal, and that it’s children who are put at risk. “My hope,” Shannon says, “is that when we eventually become parents that we’re just treated like parents. We’re married. We want to have a child, no different than any other couple eager to start a family. We just want our child to be safe. We deserve the same rights as everybody else.”