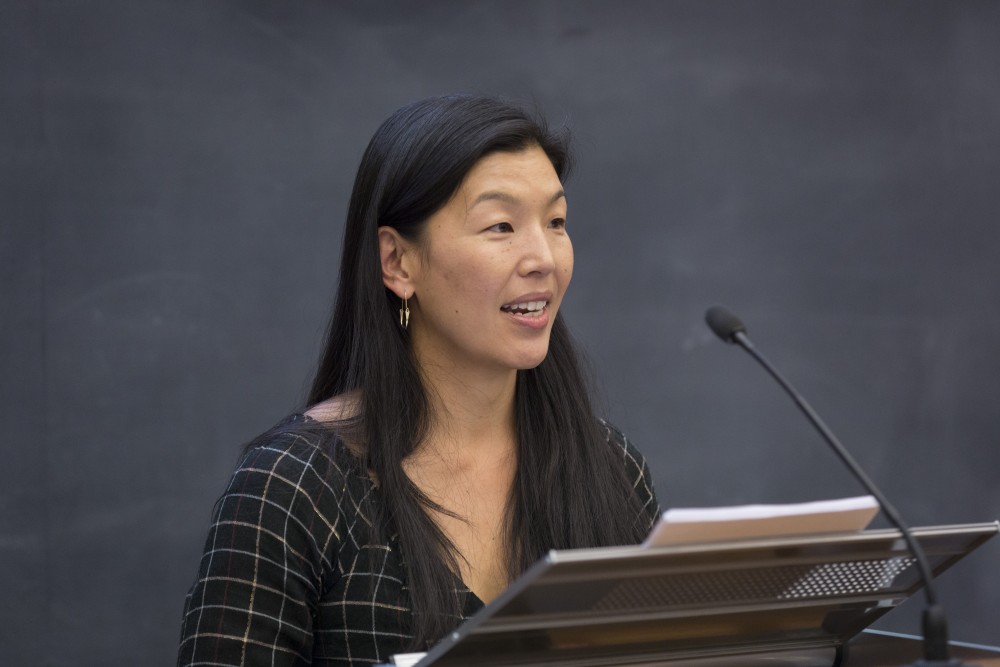 Ai-jen Poo delivered the Spring 2018 Gruber Distinguished Lecture in Women’s Rights on February 26, 2018. Poo is the Director of the National Domestic Workers Alliance and the Co-director of the Caring Across Generations campaign.

Poo co-founded Domestic Workers United (DWU), in 2000, shortly after she received her bachelors in Women’s Studies from Columbia University. Together with 11 other organizations, DWU launched the National Domestic Workers Alliance in 2007. Among its accomplishments, DWU spearheaded the successful passage of the state's historic Domestic Workers Bill of Rights in 2010.  Poo, in 2011, became co-director of the Caring Across Generations campaign in response to learning of domestic workers originally hired as nannies and housekeepers being asked to provide home care for their employers' aging relative. The campaign seeks to ensure access to affordable care for the nation's aging population and access to quality jobs for the caregiving workforce.  Poo is a 2014 MacArthur fellow and was named one of Time 100's world's most influential people in 2012.  Her faculty host was Professor Michael Wishnie, William O. Douglas Clinical Professor of Law and Counselor to the Dean at Yale Law School.

Poo’s lecture "Care and the Future of Work” addressed the need to create a “care” infrastructure which would assure quality jobs for caregivers and at the same time makes quality care accessible for all who need it. Poo began her lecture by making visible how undervalued the caregiving work is that makes all “other work” possible. She highlighted the challenges care providers face in terms of fair employment practices, due to the isolated nature of their work places. At the same time, Poo stressed the looming demographic shifts that will require even more care providers. For example, the “Baby Boomers” are reaching retirement, and their life-expectancy is increasing. Simultaneously, the largest generation in the US -- “Millennials” --are beginning to have children, while the cost of living means most parents cannot afford to stay at home.  These facts alone make finding a sustainable solution for problems facing caregiving even more pressing.

Poo proposed as a solution Universal Family Care—a re-investment in the care economy that supports “the affordability and accessibility of care,” ensuring that caregiving jobs becoming good jobs with economic security. Poo, talked about caregiving relationships within her own family and the power of storytelling about care to reveal its importance. She asked lecture attendees to turn to the person sitting beside them to talk for two minutes about someone in their own lives who cared for them. The lecture hall came alive with the sound of conversation. When Poo settled everyone down, she turned to the current moment of political divisiveness, yet that the economic and political threats emerging after the 2016 presidential election have been met with a renewed sense of activism-- driven by women. “This is really our time,” Poo said of gender equality. “This kind of moment only comes around once a century maybe.” But, she said, we have the opportunity to go further and “catalyze a transformation in our democracy.” She ended her lecture with suggestions for sustain including all members of society in building a caring future. A recording of her lecture can be found here.

The following day, Tuesday, February 27, Poo participated in a Branford College Tea hosted (in absentia) by Head of College Dr. Enrique de la Cruz (Professor of Molecular Biophysics and Biochemistry). Professor Jennifer Klein, a Yale labor historian, served as moderator; Klein’s expertise in the history of domestic work came through in her thoughtful conversation with Poo. Undergraduates and other Branford College guests had an opportunity to engage in depth with Poo in an informal setting.