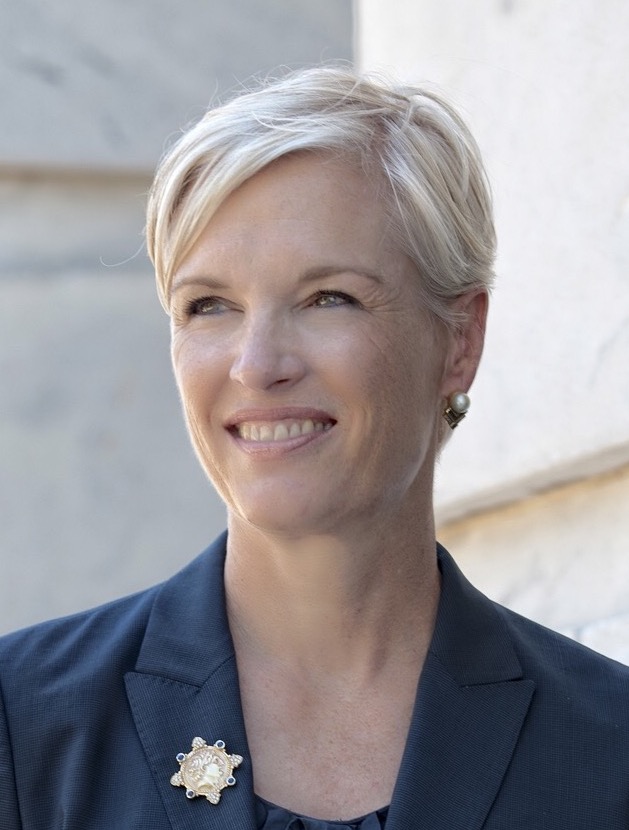 Cecile Richards, a national leader for women’s rights and social and economic justice, delivered the 2021 Gruber Distinguished Lecture in Women’s Rights virtually on Monday, March 8, at 4:30 p.m. Ms. Richards, in conversation with Heather Gerken, Dean and Sol & Lillian Goldman Professor of Law, spoke on "Women and the Workforce - How a Pandemic Demands Systemic Change".

Cecile Richards began the discussion by introducing the organization she started a couple years ago, Supermajority. Richards described Supermajority as a political home for women, meant to offer the type of training, support and community that women want. As an organization designed to build grassroot power and engagement though, things changed overnight for Supermajority when the pandemic hit. However, to Richards, the pandemic put a bright light on the issues women face today.

Richards pointed out that women are the majority in the United States and have always been the most reliable and progressive voters in this country. If women, across race, experience and background, began voting as a block, we could change politics for the next century. With the election of Vice President Kamala Harris, as well as women of color running for office in historic numbers, women are clearly shaping agendas. The challenge now is to organize around the political urgency that women feel. Though there has been a sigh of relief since the inauguration, Richards stressed that we cannot let the embers go out.

Richards also discussed the structural challenges women face in running for political (office e.g. money, mentors or even just a tap on the shoulder from party establishments). However, Richards finds hope in the fact that women are running anyways. Ayana Presley and Alexandria Ocasio Cortez, she said, are not waiting to be asked. Such representation matters as it determines what issues get raised in the first place.

Richards pointed out that historically, Black women have been the most reliable and democratic voters. White women, however, have been all over the map, and have voted for Donald Trump. The question today is how to build a voting bloc across race. Richards described that in the pre-COVID era, the most exciting time for Supermajority was when women from diverse backgrounds came to understand their potential political power and built relationships with each other at the local level.

Richards believes that with greater representation of women, systemic investments in healthcare, child care, and public schools are being made and prioritized. Currently, we have the most diverse and gender balanced cabinet in the history of the US, and this means there are people thinking about the impact of policies on women and people of color. Richards is also hopeful that this administration will show how the role of government can be good.

Richards argued that gender equality should not be a political issue; equal pay, maternal benefits, and child care benefits are good for everyone, not just women. Currently, women’s rights are considered a Democratic issue, not a bipartisan issue, and it is disheartening to see. However, today, 40% of Congress is female. And Richards believes this needs to be reflected in the Republican party too. She hopes that women in the party begin to speak up for something different, as partisanship has gotten very divisive.

Richards also stressed the importance of investing in young people. From the environmental movement to gun reform, young people have been leading us, and we are responsible for supporting them, she said. In addition to creating space for a new generation, Richards believes she will continue to move us towards the north star of gender and racial equity.

As moderator, Reva Siegel began the panel discussion by defining reproductive justice as the human right to maintain personal bodily autonomy, to have children as well as not to have children, and to parent the children we have in safe and flourishing community settings. Linda Greenhouse followed by presenting a set of takeaways from the Donald Trump presidency, arguing that the main question today is whether we are in a world where we just have to accept what the government says. Greenhouse also identified a unique set of problems we face today: bans on abortions in places like Mississippi and South Carolina, as well as a new set of TRAP laws that ban access to abortion on the basis of specious reasons.

Cecile Richards offered that political solutions are needed for reproductive justice, not just litigation strategies. With the pandemic and the economic and racial justice challenges it has brought, it has been very hard for the issue of reproductive rights to break through and rise to the top. The question now is how can we create the type of political agitation that can influence the Supreme Court.

Greenhouse answered that we must lose our inhibitions on calling out what we see --an attempted theocratic takeover of social policy structure. She argued that we are in a situation today where we might even be facing a direct overturn of Roe v. Wade. Smith agreed, and stated that given the chance, she believes the Supreme Court would overturn Roe v. Wade. Richards argued that in the face of such a threat, we have to define the problem of reproductive rights in a way people can relate to, by bringing stories of lived experiences into the litigation process.

Siegel used the Reproductive Justice (RJ) framework to argue that we must look at how policy decisions impact abortion. For instance, Louisiana enacted its Admitting Privileges Law in 2014 and blocked access to abortion. However, it did not do anything to make pregnancy safer for women in terms of providing Medicaid or sex education either. This directly compromised women’s autonomy and health, and so the question became: do pro-life jurisdictions reason about abortion differently than other policy choices that promote health and life?

Fatima Goss-Graves pointed out that with the pandemic, there have been many efforts to make abortion a trade-off for broader support and relief for families, and this shows how the legal right to abortion is not enough. Real and meaningful access to abortion is needed. Bills such as the EACH Act, the Women’s Health Protection Act, the Black Maternal Health Momnibus Act and the Pregnant Workers Fairness Act have become rallying cries for us to think about abortion in a broader narrative, not just in terms of trade-offs.

Siegel continued by arguing that when it comes to things like the Pregnant Workers Fairness Act, some pro-life Americans will show up, but many will not. Siegel stated: if you do really have a commitment to life, then show us what you mean by pro-life. Otherwise, pro-life is not really about care, but about control. Richards agreed that such hypocrisy is immense today and argued that reproductive access must be part of any pro-woman agenda.

Richards concluded by stating that we have a political problem today that we cannot litigate our way out of. We need to frame the problem of reproductive justice in a way that everyday people can understand, by linking it with the ability of people to make decisions regarding their healthcare.