Five former workers filed a federal lawsuit on May 1, 2015, against Goodfellas Restaurant, located on the corner of Trumbull and State Streets. In the past, the Connecticut and Federal Departments of Labor have each investigated Goodfellas for violations of labor law, after which the restaurant agreed to pay over $30,000 in wages owed to their workers. The suit alleges that the owners and managers of Goodfellas continued to exploit and harass their workers, refusing to pay minimum wage and overtime, belittling the workers with racist, xenophobic, and homophobic slurs, and also subjecting them to harsh physical working conditions.

The lawsuit further explains that the workers suffered burns, bruises and other physical and emotional harm as a result of Iannaccone and Coppola’s abuse, and that the bosses employed fraud and deception to conceal their crimes while threatening and intimidating the workers to prevent them from seeking legal redress. Members of the workers’ rights organization Unidad Latina en Acción (ULA) have called for a boycott of Goodfellas, and continue to hold demonstrations outside of the restaurant.

The complaint is available here. 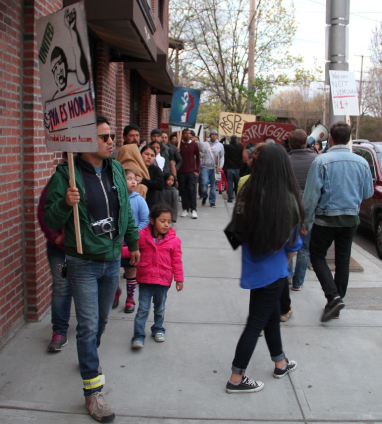