On August 25, 2016, Martín Batalla Vidal, a recipient of Deferred Action for Childhood Arrivals (DACA), filed a federal lawsuit in the Eastern District of New York challenging the reach of the preliminary injunction issued by a federal court in Texas in United States v. Texas.  The Texas case sought to block the implementation of the Obama Administration’s 2014 immigration-relief initiatives, Deferred Action for Parents of Americans Lawful Permanent Residents (DAPA) and an expansion of DACA. On September 29, 2016, the advocacy organization Make the Road New York (MRNY), some of whose members, clients, and employees are DACA recipients, joined the lawsuit.

On September 5, 2017, after Attorney General Sessions announced the administration was terminating the DACA program, Mr. Batalla Vidal and MRNY requested leave to amend their complaint in order to challenge the decision to rescind DACA. The plaintiffs argue that the decision is unlawful under the Administrative Procedure Act and the Fifth Amendment

Five more individual plaintiffs joined the lawsuit in September 2017: Antonio Alarcon, Eliana Fernandez, Carlos Vargas, Mariano Mondragon, and Carolina Fung Feng. These individuals are all young DACA recipients for whom New York is the only home they have ever known. They have all relied on DACA to attend school, get jobs, and provide for their families. However, with the Trump Administration’s termination of the DACA program, these individuals and hundreds of thousands of other young people who have resided in the United States for their entire lives face being stripped of that protection from deportation and their ability to work and live in the United States.

On February 13, 2018, Judge Garaufis in the Eastern District of New York ordered a nationwide preliminary injunction halting the DACA Termination, ruling that the government’s decision to end DACA was arbitrary and capricious. The government appealed this decision to the Second Circuit, which held oral argument on January 25, 2019. Hannah Schoen ’19 argued on behalf of the Batalla Vidal plaintiffs. On November 5, 2018, and before the Second Circuit issued its judgment, the Government filed for certiorari before judgment seeking consolidated review of the preliminary injunctions in the D.C., Second and Ninth Circuits. On June 28, 2019, the Supreme Court granted the government’s cert petition and consolidated Batalla-Vidal with parallel cases. After the government submitted its brief, the Batalla Vidal team filed with other individual plaintiffs (represented by Gibson Dunn and a group of law professors), SEIU Local 521 (represented by Altshuler Berzon), and Santa Clara County (represented by Altshuler Berzon and county counsel). Four other briefs were filed on behalf of Respondents. Oral argument will take place on November 12, 2019. 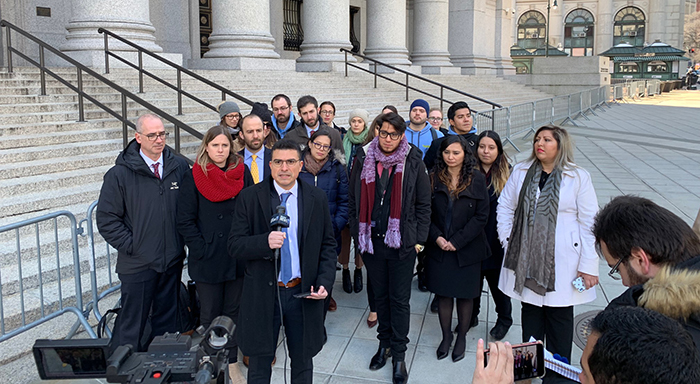 Edgar Melgar ’20 speaks at a press conference outside the U.S. Court of Appeals for the Second Circuit on January 25, 2019.

Letter to Supreme Court Regarding Impact of COVID-19

Brief before the Supreme Court on by individual DACA recipient respondent and others (filed September 27, 2019).

Brief in Opposition for Respondents Martín Jonathan Batalla Vidal, et al. on Petition for a Writ of Certiorari before judgment by the Second Circuit (filed December 17, 2018).

“Brooklyn Lawsuit Could Affect the Fate of Millions of Immigrants Nationwide” (posted October 9, 2016)