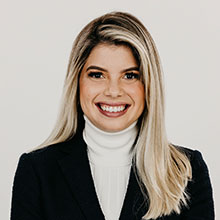 Her J.S.D. dissertation focuses on the relationship between constitutional courts and the executive following transitions into democracy, with a focus on Latin America as a special case.