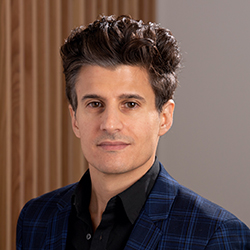 His recent scholarship has focused on notions of permanence and reversibility in the discourse of international law, pacific settlement of territorial disputes, the interplay of collective labor law and international investment law, federalism and decentralization in the Arab world, and the evolution of the “international law of nationalism” since the dissolution of the former Yugoslavia. His doctoral research explores strategies for overcoming resistance to compliance with fundamental norms in an increasingly illiberal world order.

Omar practiced labor law in the United States before joining the Palestinian negotiating team during the 2013-14 permanent-status negotiations with Israel. He later served as a legal officer with the United Nations Relief and Works Agency for Palestine Refugees in the Near East (UNRWA) in Gaza and Jerusalem. He holds an LL.M. from the Hebrew University of Jerusalem, a J.D. from the University of Notre Dame Law School, and a baccalaureate from the George Washington University. He is a member of the state Bars of California and Illinois in the United States and is a qualified solicitor in England and Wales.