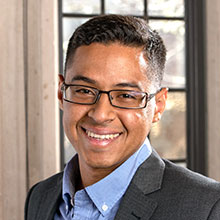 Rafael is a Brazilian Lawyer and started his J.S.D. Candidate at Yale Law School in 2019, where he research issues of law and technology, information policy, and platform regulation. He is an Information Society Project (ISP) resident fellow and concluded his LL.M from Yale Law School in 2018. Rafael was a guest researcher at the Social Science Research Center of Berlin (WZB) at the group Politics of Digitalization and a Yale Public Interest Fellow at Access Now (2020-21). He was a Fox Fellow at El Colegio de Mexico (2018-2019). He holds a Master of Laws from Yale Law School (2018), a Master of Laws in Public Law from the University of São Paulo (2015), and a Bachelor of Laws (LLB) from Federal University of Maranhão (2013).

His dissertation develops comparative research to explain variation among techniques and strategies used by different political regimes in controlling digital speech. It argues that regimes’ institutional conditions (e.g., the relationship between the government and traditional speech infrastructure before the internet, judicial independence, regime-type and supporting business coalitions) and path-dependencies of early adopted strategies shift present costs, benefits, and risks of different speech control techniques, making regimes prefer some regulations over others.